By Eyal Hareuveni
February 3, 2014
Sign in to view read count 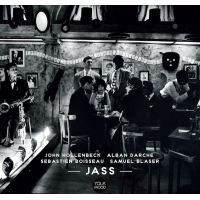 J.A.S.S. as in the first letters of the names of American drummer John Hollenbeck, French saxophonist Alban Darche and double bassist Sébastien Boisseau and Swiss trombonist Samuel Blaser. But Jass also as the term used by the Original Dixieland Jass Band in March 1917 for the very first jazz-album recording or just the name of centuries-old popular card game in Switzerland and Austria.

All of the above references relevant to this quartet who first played together in Berlin in July 2011 and recorded its debut after an artist's residency in Nantes, France, the hometown of Darche and Boisseau. The music features the highly personal, distinct compositional skills of Hollenbeck, Darche and Blaser, observing in an amused manner on the history of jazz, and packed with strong, playful and nuanced melodies.

This collective quartet keeps a delicate balance between its four musicians, emphasizing the organic highly melodic flow within its compact, well-constructed compositions. Darche and Blaser's playing stresses a beautiful singing and conversational quality while Hollenbeck and Boisseau vary the rhythmic basis constantly, alternating between loose pulses, exploratory sounds, and light swinging ones.

The quartet enables Hollenbeck to re-contextualize some of his past compositions within a new setting. "Jazz Envy," which he previously performed, and Jazz Bigband Graz on Joys & Desires (Intuition, 2005), is anchored within a strong pulse, but within this rhythmic framework the musicians have the freedom to keep exploring its theme. "Limp Mint," originally from Claudia Quintet's Semi Formal (Cuneiform, 2005) retains its dramatic story narrative, delivered now from four sonic angles that intensify its enigmatic story lines. "No D," from Claudia Quintet debut (CRI, 2002) has the most complex and demanding structure, shifting between pulses and cyclical loose, and dense forms of interplay.

Darche's "Water" and "Driving License" highlights the immediate, intuitive bond with Blaser. Both exchanging back and forth ideas, constructing thick, detailed articulations. His ironic "Miss Univers 2031" and "Tricéphale" unfold like a dense stories with many twists. Blaser's two compositions, "Recurring Dreams" and "It began to get gark," stress his unique, searching vocabulary on the trombone.

Highly impressive debut that calls for following meetings of this quartet.