By Mark Corroto
September 22, 2019
Sign in to view read count 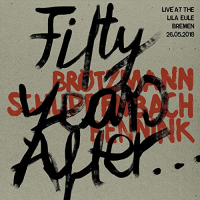 To commemorate the fiftieth anniversary of the game changing recording Machine Gun (BRÖ, 1968), saxophonist Peter Brötzmann recruited drummer Han Bennink from the original session, plus pianist Alexander von Schlippenbach. While Schlippenbach wasn't in the house for Machine Gun (the pianist was Fred Van Hove), he can be heard on the Peter Brötzmann Group's fully automatic Alarm (FMP, 1983).

Interestingly, to produce the fierce sound of Machine Gun, Brötzmann utilized an octet and likewise, Alarm was a meaty nine musicians strong. Here, half a century later, a simple trio is all that is required. But this recording is not Machine Gun redux. Sure the title track (at over 22 minutes) opens with the saxophonist's trademark lung bursting attack, but these old dogs have learned many new tricks. There is a calm in between the storms. Credit Bennink. His on again/off again relationship with Brötzmann over the decades is most definitely due to the drummer's strong will. One which met its match with the saxophonist. "No," says Bennink, "this will not be a total sufferfest," as he steers the sounds with his new Dutch swing.

The lengthiest track, at nearly 22 minutes, "Frictional Sounds" opens with Brötzmann's taragato yowl and Schlippenbach squeezing out bits of sentimentality before Bennink takes control of the pulse. He guides the music through passages of intensity and quiet, that morphs into a piano/drums duet. Bennink's brushes encourage a faux-bebop extraction that invites Brötzmann back with his tenor saxophone in hand. The drummer's pulse pilots Brötzmann toward a wee bit of bebop, and that may explain the friction between these "new thing" brothers. Brötzmann prefers less structure; Bennink more, mostly of his own creation. That tension makes for great music, especially with Schlippenbach as an intermediary. The pianist is a keen interpreter of Thelonious Monk's music, but also can play totally free. The finest trio interactions happen on "Bad Borrachos" with Brötzmann on B-flat clarinet, and the blues-inflected "Street Jive." Both tracks showcase the push of free jazz against the pull of swing and three masters connect on every level.