BY JEFF WINBUSH
September 23, 2011
Sign in to view read count 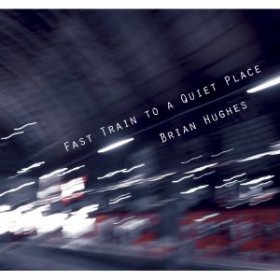 Guitarist Brian Hughes might not consider comparisons between Fast Train To A Quiet Place and early Pat Metheny albums all that flattering, but he should. When Metheny was stretching the boundaries of jazz guitar with his recordings for the ECM label, he took the instrument places it had never been before. Metheny has moved on to conquer new musical frontiers, but Hughes, who seems to have been listening closely to Pat Metheny Group (ECM, 1978) American Garage (ECM, 1980) and Offramp (ECM, 1981) mirrors where Metheny was already headed and takes it further in his own musical direction.

The Canadian-born/Los Angeles-transplanted guitarist gets things up and running with the propulsive "Fast Train." Matt Rohde is no Lyle Mays, but he's not spam in a can either, as his lustrous keyboards compliment Hughes nicely. Rohde takes a few turns on the Hammond B3 organ and adds a little funk to "Gotcha!" and "Super Tight." They're fine, but the dazzling "Fast Train" sounds like the best Metheny song Metheny never made and it foreshadows what turns out to be an energetic and thrilling album with an opening that never flags or loses energy.

The Metheny mood is maintained on the follow-up "A Blanket of Stars," but shifts into more standard territory with "Would You Like Fries With That My Dear?" Mind you, there is nothing bad about it. Hughes is a mercurial guitarist who is perfectly comfortable with switching up the groove when it suits him to do so. Quite possibly, he has no wish to be trapped in the safety zone of a "He sounds just like..." category.

The evidence how Hughes has no wish to be neatly pigeonholed is his Spanish guitar on the irresistible "Cafe Sin Nombre," and sitar on "The Gift." Hughes' mastery of his instrument is demonstrated in the understated grace of his playing.

Rather than narrowing his options to merely being a pretty good Metheny imitator, Hughes displays his comfort with a variety of genres, and Fast Train To A Quiet Place confirms he has a place among the most talented and versatile guitarists working today.

Fast Train, A Blanket of Stars, Would You Like Fries With That My Dear?, You & I, Gotcha!, Super Tight, Cafe Sin Nombre, The Gift, To A Quiet Place, Hallelujah