By IAN PATTERSON
April 1, 2013
Sign in to view read count 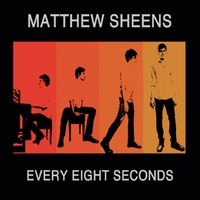 Debut recordings can sometimes suffer from a little too much subservience to the jazz cannon, as musicians perhaps wish to stamp their jazz credentials from the get go, or as is the case with Australian-born, New York-based pianist Matthew Sheens' Every Eight Seconds they can announce a refreshingly personal voice. Sheen—a former student of pianists Fred Hersch and Jason Moran—exhibits a flair for melody and a broad vocabulary that leans towards the contemporary. There's also strong rhythmic heart, both in Sheens' dancing improvisations and in the compositional structures that frame them.

Sheens does delve into the Great American Songbook on Rogers and Hammerstein's "It Might as Well be Spring" and Cole Porter's "Who said Gay Paree?" These duets with singer Sara Serpa adopt a delightfully simple approach with little adornment of the well-known melodies. Serpa sings in her native Portuguese on the sunny samba tune "Fala Ingles," with Brazilian percussionist Rogerio Boccato adding infectious rhythms. Serpa brings her exquisite blend of classical form and jazz freedom to "The Anesthetic of Familiarity" and the title track. Her hybrid style goes hand-in-glove with Sheens inclusive approach to musical idiom. On "Every Eight Seconds" Sheens, Serpa and guitarist Quentin Bryan Angus skip effortlessly together in breezy unison lines.

Another notable improvising singer, Ji Hye Kim shines on "The Rain Stays Mainly in Jamaica Plain." Sheen's composition draws from jazz, classical and folk idioms, though in the melodic flow the diverse elements are as one. Piano, guitar and voice dovetail joyously, propelled by drummer Colin Stranahan's driving rhythms and anchored by Linda May Han Oh's spare bass lines. On "Death on a Sunny Day" Sheens combines with clarinetist Adam Kolker in a dancing duet that has a little of the gaiety of an Irish reel in its veins as well as a more formal, classical influence.

A somber tone colors the piano intro to "Chernobyl," though the entrance of bass and drums steers the composition into livelier waters. On this, the only piano trio number of the set, Oh and Sheens' both solo though the common denominator with all Sheens' compositions is the primacy of group interplay over individual exhibitionism. "Cringe Culture" is a companion piece to "Death on a Sunny Day," with Sheens and Kolker again joining in light-hearted celebration characterized by tightly woven unison lines.

Even before this impressive debut, Sheens had pocketed two Downbeat awards for his prowess as a soloist. There's certainly evidence of his flair throughout but these flashes of improvisational élan are sparingly released. Perhaps more striking is Sheens' compositional strength. These first-rate musicians turn in excellent performances but the collective is at the service of the melody, which is central to Sheens' writing. Every Eight Seconds is a highly satisfying debut that simultaneously delivers on a cerebral and emotional level. On this evidence there's surely a lot more to come from the talented Sheens.

The Rain Stays Mainly in Jamaica Plain; Fala Ingles; Death on a Sunny Death; It Might as well be Spring; Chernobyl; The Anesthetic of Familiarity; Cringe Culture; Every Eight Seconds; Who said gay Paree?