Okuden Quartet: Mat Walerian/Matthew Shipp/William Parker/Hamid Drake: Every Dog Has His Day But It Doesn't Matter Because Fat Cat Is Getting Fatter 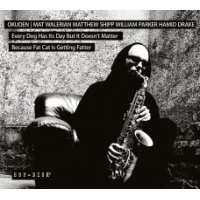 A student of eastern philosophy and Japanese culture, reed player/composer Mat Walerian coined the Okuden series name from a Japanese word meaning "inner teachings." Walerian had studied piano at six and taught himself saxophone while in his teens. He expanded his self-taught regime to include clarinet and flute in 2008-9. Walerian has sporadically taken lessons from Matthew Shipp. His musical interests are broad and he had earlier played classical Japanese music, heavy metal, psychedelic, funk, and jazz. Walerian's original music continues to incorporate elements of chamber, jazz masterworks and Asian scales, all while facing to leading-edge statements of improvised music. On the double-CD Every Dog Has Its Day But It Doesn't Matter Because Fat Cat Is Getting Fatter Walerian leads a quartet with Shipp, William Parker and Hamid Drake.

The saxophone quartet is a familiar setting for Shipp and Parker, permanent members of David S. Ware's seminal free jazz group. Drake too appeared on two tracks of Ware's Live In The World (Thirsty Ear, 2005). Each player has also worked with reed artist Daniel Carter. Walerian has an inimitable style shaped by many influences but attributable to none in particular.

Walerian composed the eight pieces on Every Dog Has Its Day..., each running into double digits in length, and the moods vary greatly across the two discs. "The Forest Council" opens the first disc with a portentous Parker solo. Walerian's bass clarinet adds another layer of sinister effects, which neither Shipp nor Drake diminish upon their later entrance. Shipp shares the front line with Walerian on "Thelonious Forever" which features a blistering solo from Drake. On "Magic World Pt. 1," clarinet conjures up the deep roots of the swing tradition, melded with an exploration of the instrument's complete range. The rhythm section's carefree and exuberant groove makes this mini-suite a thirty-eight-minute delight. The album's second disc feels less structured, particularly "Sir Denis" which vacillates wildly between melodies and free playing. Parker adds his shakuhachi (bamboo-flute) giving an exotic feel to "Lesson II," the dreamy, but off-kilter, seventeen-minute closer.

This is Walerian's fourth album as a leader on ESP-Disk. Each has included some configuration of these same artists: The Uppercut: Live At Okuden (2015), a duo with Shipp, Jungle: Live At Okuden (2016) with Shipp and Drake, and Toxic: This Is Beautiful Because We Are Beautiful People (2017) with Shipp and Parker. He also appears in the Matthew Shipp Quartet on the album Sonic Fiction (2018), also on EPS-Disk. Each of his albums has been critically acclaimed and Walerian's music is more intriguing with each successive release. Every Dog Has Its Day... brings together some of the best improvisers in music today; it is Walerian's best work to date and one of the best releases of the year.

Title: Every Dog Has His Day But It Doesn't Matter Because Fat Cat Is Getting Fatter | Year Released: 2020 | Record Label: ESP Disk