BY KARL ACKERMANN
February 22, 2017
Sign in to view read count 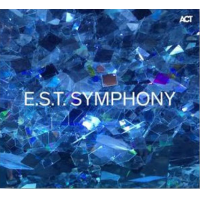 One of the most widely popular piano trios in modern memory, e.s.t. combined jazz, classical, rock, and extended techniques in an organic and original way that hasn't been heard before. Since the tragic, accidental death of the visionary pianist/composer Esbjorn Svensson in 2008, there have been a handful of piano trios that provided a glimmer of hope that the "next e.s.t." was near at hand. Releases such as The Tingvall Trio Skagerrak (Skip Records/Soulfood), Sebastian Liedke Trio To Walk in the Past (Gema, 2010) and the PLS.trio East River (Echo Chamber, 2015) come to mind but it has always been an arbitrary and capricious comparison despite the high quality of those groups. Svensson's trio has always been best appreciated on its own terms, or at least on some relevant extension of their work as here with E.S.T. Symphony.There are a number of elements that are key to the overwhelming success of this album. The presence of e.s.t. bassist Dan Berglund and drummer Magnus Ostrom can't be understated. Scandinavian conductor and arranger Hans Ek has an inimitable, yet respectful approach to his reinvention of e.s.t. favorites; it breathes new life into each while maintaining their original essence. More importantly he manages the collaboration between the ninety-piece Royal Stockholm Philharmonic and a mere sextet in a manner that diminishes neither and steers clear of orchestrated jazz clichés. Lastly, the remarkable Finnish pianist Iiro Rantala and Norwegian saxophonist Marius Neset add familiarity and freshness, respectively.

The album opens with the homage "e.s.t. Prelude," the most overtly orchestrated piece in the collection and then quickly moves on to "From Gagarin's Point of View," which like "Serenade for the Renegade" fall somewhere between third stream and classical/jazz fusion. "Seven Days of Falling" is a strikingly beautiful arrangement while "Dodge the Dodo" retains the substantial rock rhythm of the original. Extended compilations provide creative variations to originals from the namesakes of "Wonderland Suite" and "Viaticum Suite." The driving grandeur of one of the most popular e.s.t. pieces, "Behind the Yashmak" closes the album as a fittingly expressive tribute.

There is, perhaps, a bit of the rawness in the original e.s.t. recordings that is smoothed over with the number and types of instruments involved here, but that is a minor nitpick. E.S.T. Symphony reminds fans of the endless potential that the trio had. e.s.t. became edgier as it moved through its final ACT releases Viaticum (2005), Tuesday Wonderland (2006) and especially Leucocyte (2008). 301 (2012) added to their story as these unreleased numbers—originally from the Leucocyte sessions—were clearly head and shoulders above the quality that one might expect in a posthumous release. E.S.T. Symphony wisely avoids any attempt to entirely reproduce the e.s.t. sound while adding a welcome collection to the legend of the group.

e.s.t. Prelude; From Gagarin’s Point of View; When God Created the Coffeebreak; Seven Days of Falling; Wonderland Suite; Serenade for the Renegade; Dodge the Dodo; Eighthundred Streets by Feet; Viaticum Suite; Behind the Yashmak.