Home » Jazz Articles » Escaping the Delta: Robert Johnson and the Invention of the Blues

Escaping the Delta: Robert Johnson and the Invention of the Blues 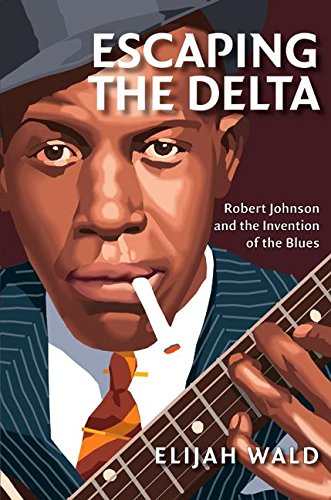 per · spec · tive ( noun ) (From Dictionary.com with elaborations by the author)

(a) The relationship of aspects of a subject to each other and to a whole: a perspective of Robert Johnson's cultural importance; a need to view the whole of blues scholarship in the proper perspective.

(b) Subjective evaluation of relative significance; a point of view: The perspective of Robert Johnson in the broader scheme of the popular musical entertainment of his time.

(c) The ability to perceive things in their actual interrelations or comparative importance: Elijah Wald broadens the perspective of Robert Johnson, His Culture and Environment, and his music.

Author and musician Elijah Wald shoots a nuclear warhead across the bow of classical blues scholarship and reportage with Escaping the Delta: Robert Johnson and the Invention of the Blues. that warhead kicks off this thoughtful study:

There has probably been more romantic foolishness written about blues in general, and Robert Johnson in particular, than just about any other genre or performer in the twentieth century.

And so this tome begins. By the end, the reader will wonder what we, the reading and listening public have been thinking for the past 50 years. Using Robert Johnson as ground zero, author Wald carefully leads the reader through an in-depth examination of Johnson's corpus, making that body of work the basis for a renewed consideration of the of the blues. Wald tracks the music's rural folk origins but focuses keenly on its evolution as an emerging African-American pop style (one that would occur again 50 years later with the advent of Hip Hop). In doing this, Wald frames the great blues stars as innovative popular artists experimenting and performing during the music percolation of the first half of the 20th Century. His effective vehicle is the juxtaposition of the artists, their audiences, and the popular music of the day with the idea and image of blues recast by a world white fans with very different experiences and aspirations.

In a very non-controversial manner, Wald provides the two histories of the blues. The first is that which has become the conventional wisdom over the past 50 years and his history of the music, which strips away the romantic veil that has covered the original scholarship. With a musician's precision and a scholar's critical eye, Wald reconsiders America's perception of the blues in vivo and in situ. as well as in trying to decipher the music's murky true origins and history. Using a lengthy comparison of how white Americans and black Americans define the blues, Wald investigates how Johnson fit between the two definitions. Wald explains how white musicians like Eric Clapton and Keith Richards interpreted who Johnson was and illustrated why he did not become one of the many forgotten early 20th-century bluesmen.

Wald's most provocative observations include the fact that Johnson is hailed as the Holy Grail of American Folk Music while he was mostly marginalized by poor record sales and a lack of recognition in his own time. Expanding his observations to the blues in general, Wald points out that the majority of Delta musicians were able to play most music and were called upon to do so in live performances. The blues were most likely never a big part of that performance repertoire. Wald paints Johnson as a minor commercial musician whose sonically-challenged solo recordings stood in dramatic contrast to the better engineered blues hits of the 1930s. Wald also emphasizes that Johnson's recordings were a mish-mash of sniped couplets from his commercially more successful contemporaries Lonnie Johnson, Peetie Wheatstraw, and Kokomo Arnold, as well earlier artists Charlie Patton, Son House, and Skip James. Wald's opins that the contemporary perception of Johnson as a haunted, "primal" artist and the indivisible element of Delta blues resulted from the densely romantic scholarship of such (white) historians as John Hammond and Alan Lomax, whose "scholarship"? has effected the romantic view of Johnson and the blues in today's white audiences.

Wald's final and most central premise might be defined as the blues as known today is largley a construct of white promoters, historians, listeners, and musicians. Johnson in partucular, while not completely marginalized in his own time received the bulk of his initial "world" recognition from the advocacy of Eric Clapton and the Rolling Stones, following the release of King of the Delta Blues Singers in 1961.

Wald's book is a bit of fresh air and also the "newest"? discussion of Robert Johnson, whose legacy in print has been bogged down in law suites, scholarly intrigue, mental illness, stubbornness, prevarication, naiveté, and self interest. Over the past 40 years the blues public has been enticed by the possibility of a "definitive"? biography of Robert Johnson. The anticipation, in fact, has lead to a tachyphylaxis of disinterest on the part of this critic regarding the life of Johnson and an increasing interest in the life of the writing on the Life of Johnson. The book to be written now is one that will trace and explain the complex relationships between such historians as Samuel Charters, Mack McCormick, Stephen Calt, Steve LaVere, Dick Waterman, John Fahey, Peter Guralnick, Robert Palmer, Greil Marcus, their individual and collective efforts to produce or thwart the production of the ultimate Biography of a Phantom.