By David Rickert
November 17, 2015
Sign in to view read count 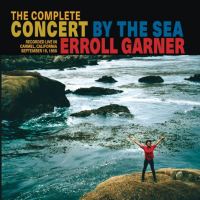 Erroll Garner's Concert by the Sea was a huge hit when it was released in 1956 and became one of the few jazz records that everyone seemed to own. One listen is all it takes to understand the wide appeal of this live date from the Sunset Center in Carmel, California. Garner, the happiest and most extroverted of pianists, works through a program of well-known standards with technical brilliance and dazzling wit in a tour-de-force of stride, boogie-woogie, ragtime, and pre-bop that was much more entertaining than it was cerebral. There weren't any throwaways in the performance, but nevertheless it had to be trimmed to fit on a single LP. Fortunately the rest of the concert has been rediscovered, remastered, and released in a 3-CD set that also features the original album and extended interviews with the players.

As dazzling as this concert was, for Garner it was a standard outing. At this point in his career he was at the top of his game, and he always did his best work in a live setting. He never learned to read music, but was able to craft intricate solos out of seemingly inexhaustible supply of ways to get from one chord change to the next in any tempo. He was equally influenced by the rhythmic stride piano of Art Tatum and the call and response of the big bands, and his renditions of popular tunes have the rhythmic force of a freight train stopping with quotes from Gershwin and Dvorak and Debussy along the way. Typically, he fed off of the energy of the crowd ("they made me feel like playing," he said of this particular audience) and called out numbers on the fly. And although his best work was done with a trio, which reigned in his more wayward tendencies, his showmanship left the others in little more than a supporting role.

Although one might think that the original issue skimmed off the best numbers from the entire date, the truth is any combination of numbers would have been a great LP. Garner is in peak form throughout, and the music is stronger for being put back into its proper place in the program to restore the ebb and flow that Garner envisioned. The opener, "Night and Day," a performance that was omitted in '56, is a prime example of how Garner delighted in finding creative ways to get to the head (and he never did it the same way twice) and presenting a dazzling display of swinging ideas. Further numbers continue the quality of the performance. "Sweet and Lovely" features a captivating grove, and "Will You Still Be Mine" becomes a solid swing number. However, the stunner is the rediscovery of the eight minute "Caravan," which showcases Garner's ability to play two different tempos with each hand. It's dense, complex, and utterly entrancing.

Garner was a big influence to piano players when Concert by the Sea first came out. However, over time the record has been pushed to the periphery while other piano great became the subject of adulation. This was due in part to the backlash that popularity unfortunately grants those who gain it; a later advertisement acknowledges it by stating "there was a time when you were probably too hip to bother with Erroll Garner's "Concert By the Sea." This new reissue restores Concert by the Sea to classic status and reestablishes Garner as one of the premier jazz pianists of the 20th century.

Disc 1: Announcer: Jimmy Lyons; Night And Day; Spring Is Here; I'll Remember April; The Nearness Of You; Where Or When; Sweet And Lovely; Lullaby Of Birdland; Mambo Carmel; Teach Me Tonight; Will You Still Be Mine; I Cover The Waterfront; Bernie's Tune: How Could You Do A Thing Like That To Me?; It's All Right With Me. Disc 2: Announcer: Jimmy Lyons; They Can't Take That Away From Me; Autumn Leaves; S'Wonderful; Laura; Red Top; April In Paris; Caravan; Erroll's Theme/Announcer: Jimmy Lyons. Disc 3: I'll Remember April; Teach Me Tonight; Mambo Carmel; Autumn Leaves; It's All Right With Me; Red Top; April in Paris; They Can't Take That Away From Me; Where or When; Erroll's Theme; Post Concert Interview: Will Thornbury with Erroll Garner, Eddie Calhoun, Denzil DaCosta Best: September 19, 1955.