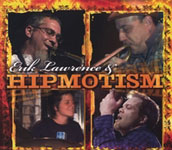 Somehow, somewhere jazz fans (maybe fanatics) changed the way one could appreciate this music. Theory has it that once the music migrated up the Mississippi from New Orleans (via Louis Armstrong) to Chicago and then spread to New York that it was no longer joyful, but serious business. Who could argue? Charlie Parker had his heroin habit, Lee Morgan found that gunshot hole in his best suit, and Albert Ayler jumped into the East River. Fast forward to the 1980s and even Dizzy Gillespie couldn't make Wynton Marsalis smile as he led the neo-cons out of the fusion desert.

But then again, I digress. Why? Because jazz can be jocund once again.

There were inklings of "the change in the eighties when John Lurie took a punk sensibility to jazz with the Lounge Lizards. Next came Roy Nathanson's Jazz Passengers, Don Byron's music of Mickey Katz, and Steven Bernstein's Sex Mob. The entertainment/fun factor was back in jazz.

Saxophonist Erik Lawrence is a member of Steven Bernstein's Millennial Territory Orchestra, modeled after the Kansas City territory bands of the 1920s and '30s. It seems only natural that slide trumpeter Berstein join Hipmotism, a quartet dead set on sailing the jazz ship back down the ol' Mississippi for a raucous good time.

The disc opens with the big strutting of Dinah Washington's "Soulville, Lawrence lobbing the heavy blat blats from his baritone saxophone and Bernstein playing licks from the old Dating Game theme, when Allison Miller lays one of those muscular drum solos down that tells the audience that there won't be much time spent in their seat tonight.

Certainly Bernstein's MTO lessons are the inspiration for Hipmotism's cover of Ellington's "Creole Love Call and the crazy blues of "Lonely Avenue. The latter showcases the skittering trumpet of Bernstein's call-and-response with Lawrence's upper register. All of which is anchored by a time-keeping Rene Hart, who is given room for a nifty slap bass solo.

As with MTO, it should come as no surprise that they cover Fats Domino, The Beatles and Pink Floyd. Even though you might have never quite figured out what the lyrics to "Come Together actually mean, when Lawrence plays the music line "He wear no shoeshine he got toe-jam football you're pretty sure you don't want to know.

The one self-penned track here is Lawrence's "Time The Is Now, a bebop track that Serge Chaloff would have loved. If you've followed this far you know they could not play this track straight, Miller and Hart stretch time signatures then slowly bring the train into the station.

The disc ends with a very sentimental tribute to Fats Domino, playing his "Going To The River. The liner notes tell us that one week after recording this, the hurricane struck; quite beautiful and very sad.