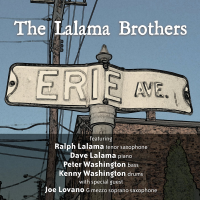 The Lalama brothers have logged plenty of miles in the jazz world, but Erie Avenue, so named for the street where the brothers grew up in West Aliquippa, Pennsylvania, is the first record they've ever put out together.

Pianist Dave Lalama has worked with everybody from drum titan Buddy Rich to vocal icon Anita O'Day, and he currently helms Hofstra University's jazz program. Saxophonist Ralph Lalama is a talented leader, sought after sideman, and mainstay in the Vanguard Jazz Orchestra. Each man has carved out his own niche over the years, but time has done nothing to diminish the musical connection and chemistry shared between these brothers; they speak the same language, which they learned together long ago, and they love the musical conversations they have.

Erie Avenue brings the Lalama brothers together with the formidable rhythm section of bassist Peter Washington and drummer Kenny Washington. Many a jazz fan will recognize that combination as the rhythmic core of pianist Bill Charlap's heralded trio, but both men also have history with Ralph Lalama; they served as his rhythm section on Feelin' And Dealin' (Criss Cross, 1990), so this album serves as a reunion-of-sorts for all of them.

Together, this foursome gets funky ("Erie Avenue"), swings through the classics ("Four Brothers"), and delivers a winning tribute to the late Dennis Irwin ("Till We Meet Again"). Other highlights on this group's playlist include a driving take on pianist Cedar Walton's "Firm Roots" and a "Portrait Of Jennie" that's underscored by a dignified Kenny Washington tom groove.

While the majority of the album tracks are quartet offerings, the brothers Lalama bring saxophonist Joe Lovano into the party with his G mezzo soprano saxophone on two numbers—"Two For Two" and the calypso-leaning "Five Brothers." They also go it as a duo on the soulful "The Gospel According To..." and "Everything Happens To Me," which has Dave Lalama pulling double duty as singer and pianist.

The Lalama brothers have earned their jazz stripes a hundred times over by now, so they have nothing to prove, but they continue to push forward and spread the gospel of this great music. May they continue to keep on doing their thing(s)—together and apart—for many years to come.

Erie Avenue; Two For Two; Portrait Of Jennie; Five Brothers; Nofrey And Jennie; Four Brothers; Till We Meet Again; Firm Roots; The Gospel According To...; Everything Happens To Me.