Eric Burdon and the Animals At Stern Grove Festival 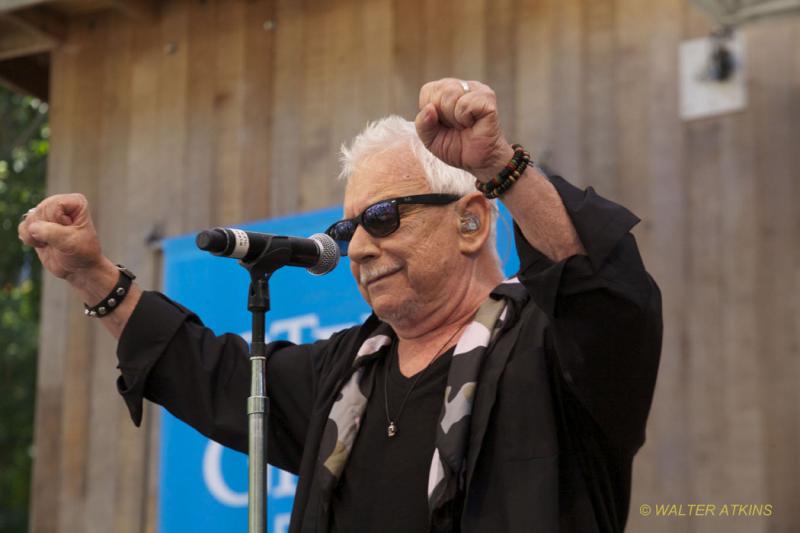 Burdon's raw unmistakable voice, that gave the world blues and rock gems like "We Gotta Get Out Of This Place" and " Don't Let Me Be Misunderstood," helped to fuel the 1960's British Invasion. His visit coincided with San Francisco commemorating "The Summer Of Love" which took place 50 years ago in 1967. The City's Haight Ashbury neighborhood was the epicenter of those boundary breaking times. SGF was also celebrating a historic milestone of its own-its 80th Anniversary of presenting the best of local and international talent in one of Northern California's best natural outdoor venues. This long established free music series had gathered SF Bay Area friends and families together for generations.

The Stone Foxes promptly fired up their set which included: "This Town," "Ulysses James," "Eye for Love," "Death of Me," "City On The Water" (Grove Song), "Cold Like A Killer," and Slim Harpo's classic "I'm A King Bee." Their version was used in a national commercial for a leading brand of American whiskey, Jack Daniels. For their finale, the band performed "If I Die." On one number, both the lead and guest vocalists unexpectedly leapt from the stage and sang directly to the swelling crowd. The music supporters clearly enjoyed this move and they quickly showed their appreciation for the singers.

After a short break, the Animals were underway with a slow, smoldering instrumental version of saxophone great Cannonball Adderley 's massive 1967 hit "Mercy, Mercy, Mercy" for their intro. Burdon then took center stage, with Three Dog Night's "Mama Told Me Not To Come" complete with simulated puffing at the appropriate moments. For the next number, he proudly paid tribute to one of his musical heroes with the number one R&B chart topper "Bo Diddley." The 1955 song was originally written and performed by Bo Diddley himself, and earned the artist a Grammy Hall of Fame award in 1998.It was the guitarist's first recorded track and first hit, becoming famous for adding African rhythms to rock and roll.

Burdon went deep into his extensive catalog for the session with the tunes: "When I was Young," and his celebratory "Monterey." It was inspired by the band's presence at the 1967 Monterey Pop festival during the "Summer of Love." This land mark event included The Jimi Hendrix Experience, Janis Joplin, The Who, Grateful Dead, Otis Redding, and much more. The defiant "It's My Life" had some people singing along. He continued with "Don't Bring Me Down" and the somber "Misunderstood."

The Animal's version of the traditional folk song "House Of The Rising Sun" was one of many high lights of the flawless day with many following his every word. This cover was also a number one smash on both sides of the Atlantic. Burdon cruised through with the popular "We Gotta Get Out Of This Place." This one summed up the feelings of lots of high schoolers. Next was "For What It's Worth" and the booming closer, "Hold On." Burdon's riveting performance brought the sun drenched Grove to its collective feet.

When asked if he was planning to do anything special to celebrate the "Summer Of Love," Burdon replied, "I have been celebrating the Summer of Love for fifty years now. I wouldn't wait for an anniversary to dust off my dreams of peace and equality." He also had some advice to share with young musicians. "Stay true to yourself. Never play to the market. Listen to as much music as you can and know your roots. Give it all you've got."

On one of the finest weather days at Stern Groove in recent memory, Eric Burdon and the Animals gave a new generation and old hands a taste of vintage musical magic from the late 60s. At the end of the marvelous day, the veteran rocker and his heady band sent thousands of delighted fans into the very warm San Francisco night.