BY SEAN COUGHLIN
February 14, 2010
Sign in to view read count 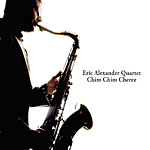 Chim Chim Cheree has been dubbed "a tribute to John Coltrane." Returning with usual sidemen Harold Mabern at the piano, Joe Farnsworth on drums, and bassist John Webber, this album represents a thorough examination of Coltrane's music made up of Coltrane originals and tunes Coltrane ostensibly owned throughout his career. While George Coleman, Dexter Gordon, and Sonny Stitt are most often cited as the foremost influences on Alexander, Coltrane is clearly among them.

Alexander's take on "You Don't Know What Love Is" showcases his lush subtone in the lower register as he cadenzas his way through the opening of the tune with grace and sophistication. Seemingly a bit drab for an opener, Alexander sparks some life into this with tasty lines—bluesy and bop, with enough variety to keep the listener engaged.

Mabern takes charge on "Dear Lord," setting up an active samba-like groove while offering subtle harmonic shifts and tasteful, melodic comping. Much more in the Alexander vein than Coltrane, it contains a sublime, lively energy.

Tadd Dameron's "On a Misty Night" is a gem from the bop era that unfortunately rarely gets played or recorded. Mabern's approach is a bit dated, swinging more like Brubeck than Dameron, but still manages some nice lines. Unfortunately, Alexander doesn't really kick things into gear and sound comfortable until trading with Farnsworth. A double time feel in the bridge as in the original recording Mating Call (Prestige, 1956) would have been refreshing here.

"Chim Chim Cheree" and "Pursuance" are the clear highlights, echoing back to the sound of Coltrane's classic quartet. These two tracks contain a rawness not heard on others from the album. Emotion and creativity at the forefront, Alexander pushes his own boundaries & gets away from simply playing changes to explore something deeper. The communication within the group seems heightened, sounding as if everyone is channeling their representative from Coltrane's classic quartet.

Adding some variety, "Afro Blue" lends itself well to Alexander's riff-like improvisation, allowing endless sequential opportunities over a static harmonic foundation. It would have been nice if this was opened up for both Farnsworth and Webber to come out and play.

"The Night Has a Thousand Eyes" is a powerhouse for both Alexander and Farnsworth, a guy who really knows how to highlight all the wondrous colors of the drum set. With precision and unrelenting commitment to swing, Farnsworth really shines on this one.

With "Wise One," the quartet captures a distinctive mystical and yearning sound that Coltrane had in his best work. Alexander has even seemed to channel a timbre that is closer to Coltrane's, bringing the album to a satisfying point of closure.

As Alexander matures, it sounds as if he's offering more than his typical nicely packaged straight-ahead post-bop. Without question he's taken that just about as far as it is going to go. This album may be the first chapter in what to expect next from this still somewhat young lion.

You Don't Know What Love Is; Dear Lord; On a Misty Night; Chim Chim Cheree; Pursuance; Afro Blue; The Night has a Thousand Eyes; Wise One.