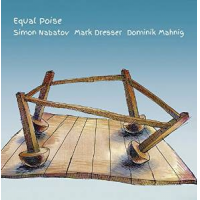 Russian born pianist Simon Nabatov has been composing since early childhood. His career has placed his residences in Italy, New York (where he studied at Juilliard), and Germany, where he finally settled. He has worked or recorded with Barre Phillips, Ray Anderson, Ed Schuller and, as a leader, has recorded in a variety of settings from solo to octet. Trombonist Nils Wogram has been one of Nabatov's frequent partners but the pianist's most unusual work has been Nature Morte (Leo, 2001), a music and spoken word interpretation of a Joseph Brodsky poem. On Equal Poise he teams with bassist Mark Dresser, with whom he issued the duet recording Projections (Clean Feed, 2014) and relative newcomer, drummer Dominik Mahnig

Nabatov has worked with a number of trios, often with Mark Helias on bass. Tom Rainey filled the drummer seat on Tough Customer (Enja Records, 1993) and several other Nabatov outings. His work with Gerry Hemingway, Barry Altschul, Gerald Cleaver, Paul Motian and even Han Bennink are among the indications of the pianist's eclectic affinity for superb drummers. The style of Equal Poise is decidedly more overtly percussive than Nabatov's trio work with Motian and Rainey. Mahnig's style is heavier and more punctuated and brings out similar qualities in Nabatov's own playing.

ADVERTISEMENT
Equal Poise opens with "Full Circles," lyrical but with sharp elbows that intermittently poke and prod the piece to abstraction. "Wind Up and Down" has Dresser coaxing an array of sounds from the bass, using bow and plucking and leading Nabatov to an diverse solo that alternates between delicate and pounding. Mahnig shows discretion as he pulls back in the face of his trio-mates more aggressive approach. "Sambar é Bom" and "Minor Force" are further along in their abstract explorations with fragments of melody loosely holding together an assortment of outside excursions. The closing "Lithe Moves" begins with Mahnig's versatile solo and concludes with Nabatov immersed in Cecil Taylor-like territory with torrents of notes and heavy, low register chords pounding their way through the ruckus.

Nabatov has been a bit of a chameleon throughout his career. He can be as lyrical as Bill Evans or as progressive an improviser as Alexander Hawkins, moving back and forth from hyper-kinetic percussive effects to impressionism. Not nearly as well known in the U.S. as he should be, Nabatov's long overdue recognition should be furthered with Equal Poise, an adventurous and edgy collection with high energy performances all around.