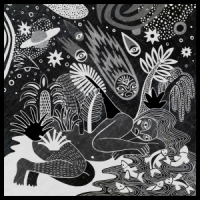 Swedish guitarist Samuel Hällkvist's rifftastic electric trio plays an exhilarating mixture of jazz, prog rock and minimalist music. Riffs aside, the key ingredients are cross rhythms, rhythmic displacement and lavish servings of MIDI-enabled keyboards and tuned percussion. The result is heavy on the tension and light on the release. A close comparator is Swiss keyboard player Nik Bärtsch's work with Ronin in the mid 2000s. Try and keep count of the beats and you might well go mad. Better to let go, feel the force and enjoy the ride.

Hällkvist is a frequent collaborator with British-Bahraini trumpeter Yazz Ahmed, who is heard on two tracks here to winning effect. The pair first met in Sweden on a development project involving Jazz i Malmo and London's Tomorrow's Warriors. Hällkvist admired Ahmed's ability to make "the most complex music sound natural and beautiful." Ahmed admired "the very attractive oddness" about Hällkvist's approach to the guitar. Hällkvist played on Ahmed's La Saboteuse (Naim, 2017) and Polyhymnia (Naim, 2019), and Ahmed played on Hällkvist's Return To Centre (2013) and Variety Of Live (2015). On her Epik Didaktik Pastoral tracks, Ahmed is joined by fellow trumpeter Noel Langley. Italian trumpeter Luca Calabrese plays on two other tracks. (And no, you are not hallucinating: the sleeve art on Epik Didaktik Pastoral, La Saboteuse and Polyhymnia was all created by British artist Sophie Bass).

The ten tracks on Epik Didaktik Pastoral, which is effectively a suite, could be characterised as either cohesive or samey, depending on the listener. Either way the music is pretty relentless, just like Bärtsch's or Steve Reich's can be relentless. But that is the point, or least part of the point. There are occasional flashes of tonal variety—the trumpet on "Dekorum ll Medel" sounds briefly Arabian (though it is played by Calabrese not Ahmed), and the MIDI keys on a couple of tracks suggest Joe Zawinul in Weather Report circa Mysterious Traveller (Columbia, 1974). Not so pastoral, but certainly epik.