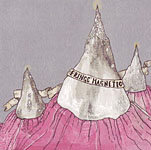 Trumpeter Rory Simmons' Fringe Magnetic was a highlight of the F-IRE Collective's festival launching London's smart new concert venue, Kings Place, in late 2008. Now we have the CD, which is released by F-IRE's fraternal co-activists, the LOOP Collective. The distinction between these two collectives, never rigid, is becoming increasingly blurred, as musicians move to and fro between them: see, for instance, the review of the John Turville Trio's Midas (F-IRE, 2010). It's all good.

Fringe Magnetic has a novel lineup. Take a moment to check the personnel listing below. It's a chamber ensemble, and so is heavy on woodwind and strings. But it also has sinew; generally in Simmons' arrangements, particularly in the inventive grooves-plus of bassist Jasper Hoiby and drummer Ben Reynolds (also, incidentally, the drummer on Midas). Most of the musicians get opportunities to solo, but the emphasis is on ensemble playing, in which gritty rhythmic counterpoint underscores astringent instrumental scoring, augmented on four tracks by the British-based Norwegian vocalist Elisabeth Nygaard. (Multi-instrumentalist Django Bates, whose work shares a degree of quirkiness with Simmons,' is another British bandleader making effective use of Scandinavian singers and their gift for ethereal otherworldliness).

The source of Simmons' inspiration is equal parts jazz and modern conservatoire music, but it wears its complexity lightly. A wintry chill coexists with springtime vivacity, intricate arrangements with improvised passages. The vocalists—Nygaard is joined on "Empty Spaces Reprise" by Andrew Plummer, who is also featured on "Ish"—add a lot. Nygaard's cool detachment is contrasted by Plummer's rasping, apocalyptic baritone. On "Ish," a setting of a poem by Charles Bukowski, Plummer sounds positively demented.

A pleasure too are the instrumental soloists—bass clarinetist James Allsopp, clarinetist Robin Fincker, violinist Kit Massey, pianist Ivo Neame and Simmons himself among them.

Another medium-sized band featured at the inaugural Kings Place festival was saxophonist Ingrid Laubrock's nonet (Allsopp was memorably part of that group too). Laubrock's equally absorbing project is so far proving harder to get onto disc. Meanwhile, Empty Spaces is not to be missed.