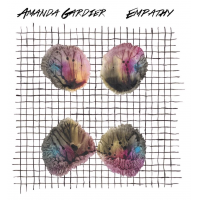 With a clear sense of composition and where her own fluid voice, and those of her superb surrounding musicians, fall within the whole, Indiana-based alto saxophonist Amanda Gardier opens her debut disc, Empathy, on the multi-layered strengths of the palette-setting "Giants," an expansive piece that allows her plenty of time in the lead before gracefully stepping aside for a guitar-fuelled crescendo.

Each of Gardier's ten originals on Empathy exemplifies her guiding principle to "turn the perceived notion of empathy as a weakness into a strength." The introductory dance of Rob Dixon's honking tenor and Gardier's keening alto on "Revolving Door" is a fanciful duet until guitarist Charlie Ballantine slashes in, breaking the song open for the rest of the band—pianist Clay Wulbrecht, bassist Jesse Whitman and drummer Chris Parker—to add their voices to the conversation, before Dixon and Gardier return for one more pass on the dance floor.

"Fjord" is an enticing bossa nova and a reverby guitarist's dream, as the rhythm section shifts the time ever so slightly. On "Two-Sided," Gardier throws a bright light on bassist Whittman, who has definitely come to play while Dixon, like a voice that doesn't belong but is essential to the dialogue, plays out of time with the band, creating a gauzy yet driven interplay. With the quartet rock ready, the solid closer, "Leap of Faith," rocks to a finish. Her inventive re-imaging of Bjork's idiosyncratic "Joga" finds Gardier soloing where Bjork had strings, before Ballantine takes over and the track ends with Dixon and Gardier trading merrily. As good a tune as "Smoke" is, and as esoteric as vocalist Mina Keohane sounds with her wordless vocal, the track would be improved if it was the leader filling in on flute and/or clarinet.

Which brings us to the one thing to say regarding Gardier's clean writing style: at times it keeps her sax and flute at bay. It would be good to hear her break loose, but perhaps that's what the stage is for, or her future recordings. Until then, Empathy is a debut with a lot of something for everyone. And that in and of itself is no small feat.