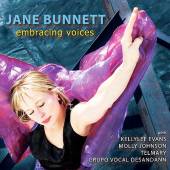 Saxophonist/flautist Jane Bunnett's Embracing Voices honors the human voice with unbridled intensity and features brave rhythmic, melodic and harmonic explorations. The record features fourteen instruments that swathe the heavenly choiristics of Grupo Vocal Desandann, the legendary ten-person a capella ensemble that celebrates a Haitian legacy. The choral group employs dense harmonies, intricately woven into call-and-response segues and contrapuntal structures that makes Desandann one of the most distinctive 10-voice choirs in music. Stately basses grind con arco together with the trill of the high-flying soprano voices, both ranges held together by the impervious glue of the contralto and counter-tenors in the middle. Often these are melded with the bright skittering of the tres guitar and the rumble of the congas and tumbas, punctuated with the melodic clunk of the claves. On this record lead voices occasionally arise from the five male and five female singers like waves in an ocean of sound.

Lead voices have also been crafted to include the rich sonic tapestry of Telmary Diaz's rap, the soaring, soulful inflections of Kellylee Evans' pipes and the gravelly and emotionally-charged blues of Molly Johnson, who leads the cast in one of the most definitive versions of legendary Belgian troubadour Jacques Brel's "If You Go Away (Ne me quitte pas)" since Nina Simone. Throughout the record there is a wonderful interplay of instruments, which provide impetus to the human voice and surround it with rich tonal colors.

"Sway," a fine composition opens with a series of quarter notes sung a capella by Desandann before a drum roll that introduces the bass pedal point and the repetitive hypnotic riff draws in the rest of the group into its spirit-based musical vortex. "Kaleidoscope" features a rich, minor variation start to the song, which then proceeds to unfold like a vocalese poem, accompanied by the flute and the militaristic rattle of snare punctuated by splashes of cymbals. The voices of Desandann then introduce the purest pain—on the deeply traditional Afro-Haitian coloration—as the sopranos and mezzo-sopranos launch into "Wongolo," a beautiful Haitian freedom song that says: 'We will rise again... Haiti will not die...' Bunnett's flute flits like a firefly around the voice of Kellylee as "Serafina," a bright work that is infused with the rhythmic intensity of a Cuban rumba and a streaming R&B romp into landscapes that cascade one into the other. There is much more to recommend this fine record.

Finally, it has been a while that the legendary Don Thompson has opened the door to his musical genius. On this record he plays bass, piano and vibraharp, arranges his own composition, "Egberto" and "If You Go Away," and—as Bunnett herself suggests, is, with the saxophonist and husband/trumpeter Larry Cramer—a towering presence amid a group of musicians looking to make a significant contribution to the art of jazz. Any label that is bold enough to stand by Afro-Cuban jazz music deserves high praise for being brave and brassy in backing high creativity over rank popularity.