By Jack Bowers
February 5, 2020
Sign in to view read count 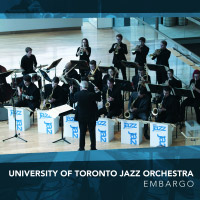 Talk about setting the bar high: on an album designed to showcase the talents of students in Professor Terry Promane's classes on arranging, the University of Toronto Jazz Orchestra's music director, Gordon Foote, chose to open Embargo with Rob McConnell's classic arrangement of the Billy Strayhorn warhorse, "Take the 'A' Train," thus giving the undergrads a formidable target at which to aim.

Does their aim prove true? Beyond any doubt. The lone wayward shot occurs on the jacket cover, which lists Hannah Barstow's lustrous "Medium Blue" as Track 7, whereas it is actually Track 2, preceding Brad Turner's pensive "Over My Head" (arranged by trumpeter Ben Frost). The orchestra is not to blame for that miscue. Otherwise, this is a series of deft and engaging charts, from those named through saxophonist Jeff Claridge's atmospheric "Apollo" to Jesse Marshall's gently swinging "Summer's Over," alto saxophonist Zach Griffin's fretful and feverish "Undiagnosed" (on which he solos with trumpeter Kaelin Murphy and drummer Jacob Slous), trombonist Vonne Aguda's strapping "Embargo" and Anthony D'Allesandro's perceptive arrangement of Randy Weston's groovy "Hi Fly," wherein his piano shares solo space with Slous, trumpeter Christian Antonacci and alto saxophonist Griff Verona.

It is clear that Promane's students have been paying close attention in class, as none of their earnest and resourceful charts merits less than unreserved approval. The same is true for the orchestra itself, which responds to Foote's every cue with alacrity and precision. There's no letdown among the soloists either; aside from those already named, trombonist Nick Adema and baritone saxophonist Alex Manoukis are standouts on "Take the 'A' Train," while Griffin shines again on "Medium Blue," as does Claridge (clarinet on "Apollo," tenor sax with Adema and bassist Evan Gratham on "Over My Head"). The rhythm section, ably driven by Slous, never misses a beat.

Of the many Jazz Studies programs which continue to flourish, in the States and abroad, the University of Toronto ranks among the very best, and Embargo surely does nothing to diminish its impressive and well-deserved status.

Take the “A” Train; Over My Head; Apollo; Summer’s Over; Undiagnosed; Hi Fly; Medium Blue; Embargo.

About University of Toronto Jazz Orchestra