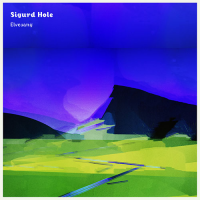 Sigurd Hole has already built a strong reputation, in his native Norway, for his work with Eple Trio on albums including The Widening Sphere of Influence (NORCD, 2008), in addition to the trio's collaborations with NORCD label head/saxophonist/goat horn master Karl Seglem on albums like NORSKjazz.no (NORCD, 2012). The double bassist has also collaborated with guitarist Jon Eberson (criminally undervalued outside of Norway) and pianist Helge Lien, and has built a busy schedule as a recording and touring musician, in addition to regular teaching gigs at the Norwegian Academy of Music and Agder University College.

But it's his more recent recruitment by fellow Norwegian Tord Gustavsen, for the ECM pianist's longstanding quartet (replacing the increasingly busy Mats Eilertsen), that may garner Hole the broader international acclaim he so richly deserves. It also makes it the perfect time for Hole to launch his own label and release his first album as a leader, Elvesang. Recorded nearly two years ago in the 270 year-old Ytre Rendalen church, located near Lake Lomnessjøen (close to Rendalen, the small south-eastern Norwegian town where Hole grew up), it's no surprise that Hole's music is deeply informed by the same Norwegian folk tradition and unmistakable interest in nature that so define Eple Trio. Just a quick look at the titles of Elvesang's twelve improvised pieces—amongst them "Soloppgang" (sunrise), "Torden" (thunder), "Skogdans" (forest dance) and the title track (river song)—and Hole's inspirations become crystal clear.

Solo bass recordings are often challenging, the instrument's low-register range often rendering even the most melodic music more difficult to discern for some. Still, there are those capable of making their sizeable instruments truly sing, notably fellow Norwegian Arild Andersen, Sweden's Anders Jormin and Germany's Eberhard Weber. Based upon the music of Elvesang, Hole should be considered a younger addition to that prestigious list.

As has so defined his work to date, Elvesang is a quiet, introspective album where Hole's instrumental mastery always comes second to the music itself. Demonstrating his virtuosity not with overt gymnastics but, instead, through a remarkably keen command of his instrument, Hole employs light electronics (looping) on the opening "Prelude," where bowed harmonics create the foundation for an evocative series of melodies that move effortlessly from linear phrases to chordal passages so rich they almost sound like a harmonium. Similarly, his movement from bowed natural tones to higher register harmonics on the following "Soloppgang" are both seamless and marvelous, even as he imbues the music with a kind of air and Zen-like tranquility that furthers his work with Eple and, no doubt, the similarly spare Gustavsen.

Elvesang's 42-minute duration is perfect for vinyl (the album being available in CD, vinyl and downloadable formats), its twelve spontaneous compositions, ranging from less than a minute to, in just one case, more than six, never overstaying their welcome.

Hole's use of his double bass as a percussion instrument on "Torden" (thunder) is impressive. His notes are often felt more than heard as Hole strikes his strings with his bow, the natural reverb of the room making them sound even more massive as they combine, near the end of the piece's brief, 85-second duration, with some real thunder from a storm taking place in real time outside the church. "Tre" (three), on the other hand, needs all five minutes and forty-three seconds for the bassist to slowly, painstakingly build an improvisation reliant on perfect control of his bow as he moves, again, from natural tones to harmonics, from dark-hued melodies to striking chords and from more conventional arco textures to some rarely (if ever) heard timbres.

"Fugler" (birds) is, again, almost entirely percussive as Hole, once again, employs his bow to strike the strings as, this time, the sound of birds outside the church provide something with which Hole can interact. Elsewhere, the 52-second "Løvskimmer" demonstrates remarkable precision in Hole's keen cross-bowing and use of harmonics. "Lysning," on the other hand, is a rare pizzicato piece for Hole, where he utilizes extended techniques (like picking the strings behind the notes on his instrument's neck) to create a piece of rare specificity. "Skogdans," with Hole's innate traditional lilt, builds into a rhythmic piece of simultaneously (and dramatically) bowed chords and melodies that echo the "forest dance" of its title.

A wooden church may, for some, be far from an ideal recording facility, but it was clearly the perfect place for Hole to shape Elvesang. The intrusion of outside sounds, ranging from thunder and bird sounds to gentle rain on the roof, only add to the album's overall nature-driven ambiance, made all the more so by the room's lovely natural reverb. It may be a bold move for Hole to make his first release under his own name a solo bass record, but even when it reaches beyond melody to more adventurous texture and color, Elvesang is an album of profound beauty and, more often than not, calming quietude. A recording that trades nuanced, delicate evocations for the merely obvious, Elvesang is all the more impressive—and captivating—for it.