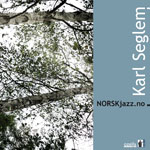 He's done everything from solo concerts on heavily processed goat horns to free improvisation duets with fellow Norwegian, percussionist Terje Isungset, but in a career spanning 20 years and including the more electronica-centric yet curiously timeless Urbs (NORCD Music, 2008), saxophonist Karl Seglem has never recorded an album with a conventional sax-piano-bass-drums quartet. Until now. NORSKjazz.no may use a time-tested format to deliver eight songs largely written by Seglem, but it remains deeply rooted in a more austere Norwegian jazz aesthetic. This is an album of mostly pensive, dark-hued material that owes as much to traditional Norwegian folk music for its lyrical inspiration as it does the jazz tradition.

Seglem recruits NORCD label mate Eple Trio—whose The Widening Sphere of Influence (2008) was one of last year's pleasant surprises—to round out his quartet. Eple Trio—pianist Andreas Ulvo, bassist Sigurd Hole and drummer Jonas Howden Sjøvaag—is a proven entity with pre-existing chemistry, a trio that knows how to explore a surprisingly broad emotional spectrum with the greatest subtlety. The ambience of NORSKjazz.no may be more suited to nighttime, especially the appropriately titled "Nattsong" (Night Song), but there are also moments of greater intensity. Much as legendary Norwegian saxophonist Jan Garbarek possesses the paradoxical ability to burn in the gentlest of ways, so too does Seglem and his group.

The reference to Garbarek might be an obvious one for those outside of Norway who are unfamiliar with its vibrant scene—and Seglem's position, as both a musician and head of NORCD—but it's important not to overstate his influence. Garbarek undeniably looms over this project, and Seglem certainly plays with the same sense of economy and attention to tone, but it's the country's traditional music that looms largest in the melodies of the melancholy "Året Hallar," the stark and backbeat-driven "Lull," and soft but lilting "Song for To." Seglem's tone is less tart than Garbarek's, a warmer alternative that brings a spare yet potent lyricism to his solos—most notably on "Lull," where the group relentlessly builds to a powerful climax that's a high point of the album.

Ulvo, also heard as a member of trumpeter Mathias Eick's quartet, is an equally attuned player who brings both nuance and versatility to the set, while Hole possesses a deep-in-the-gut tone not unlike Arild Andersen, and Sjøvaag works hand-in-glove to be both a sensitive colorist and more direct rhythmist. Together they turn Seglem's music and the one cover—Está Longe's brief but hauntingly beautiful "Portugalsong"—into a 40-minute set where interplay is at a deep level that largely eschews virtuosic display. Instead, it's the kind of deep empathy that's felt almost on a subconscious level, lending NORSKjazz.no an emotional resonance that transcends any individual player's contribution.

Seglem's goal may have been to record "an acoustic album with a classic jazz quartet," but by remaining true to his roots he's delivered an album of sparse elegance that doesn't lose sight of the inherent exploratory nature of jazz.