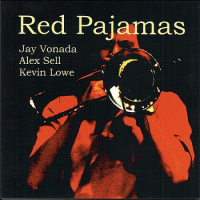 Of the many groups the trombonist is associated with, The Jay Vonada Trio featured here—and which performs monthly at the Zola New World Bistro in State College, PA—may just be his most unusual band. Vonada brings together organist Alexandra Caselli and drummer Kevin Lowe to produce a distinctive sound not typically found in a trio setting—uncommon yet engaging. Kicking off with the bluesy "Blue Mood," Vonada takes the lead, as he does repeatedly throughout, playing hard and stepping aside for some grinding sounds from Sell.

Marked by a rumbling solo introduction from Lowe, the brisk upstart waltz of "November Day" takes shape, moved along by Vonada's deliberate phrasings, Sell's tasteful organ lines and more crashing cymbal accents from Lowe. Changing directions on the aptly titled "Fresh Start," Vonada offers a classy melody more reminiscent of a jazz standard on this, one of the highlights of the disc. Lowe's "Not A Thing" contains expansive solos from the drummer while Sell's "Jeanie B." gives Vonada and the band plenty of space to explore and improvise.

Other album highlights include the upbeat "Sea Jam," "Merino" (with Vonada on muted trombone), the hurried blazer of "E in 3," and the beautiful sprawling melody of the title track. Vonada is neither flashy nor shy when he's howling on the trombone, yet it may just be his writing which distinguishes the music of Red Pajamas, both different and uncommonly good.