BY JIM SANTELLA
November 1, 2001
Sign in to view read count 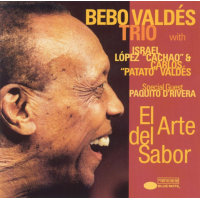 Traditional Cuban music brings a festive mood to any performance. It's music for dancing and it also allows plenty of room for the artists to improvise. Three legendary Cuban artists share equally on this session to reminisce about the development of Latin jazz and its relationship to traditional music. Each is in fine form. Since it's a trio session, Bebo Valdes, Cachao and Patato Valdes are heard individually, clearly and distinctly throughout. Traditional pieces by Ernesto Lecuona, Manuel Corona, Julio Cueva, Eliseo Grenet, Rafael Hernández and others ring familiar. Dance forms such as bolero, mambo, son, guaracha and conga invite the kind of majesty that normally fills a ballroom. The meticulous way this trio performs "Cumbanchero" at a blazing tempo gives one clear indications of their lifelong dedication to this music. By mixing tradition with bebop, the trio crosses bridges; particularly on the three pieces in which Paquito D'Rivera appears. A swinging trio version of "Route 66" recalls the original with authenticity. Of course, it's all flavored with Afro-Cuban rhythms. Recorded last year in New York, this session appears to reveal a "fountain of youth." Extensive liner notes and brief bios of each artist increase the historical value of this recommended package.