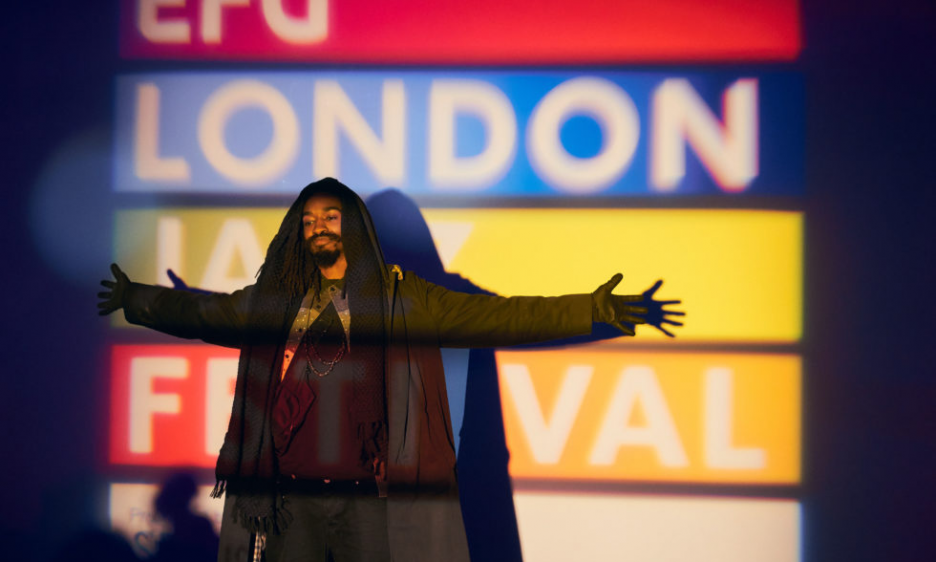 By Luke Seabright
November 29, 2019
Sign in to view read count
A truly great event that advocates for an art form like jazz will celebrate both its history and its younger incarnations. It can breathe life into the music's traditions while exposing new ways forward. The EFG London Jazz Festival, through its vast programme of concerts in venues across the city, succeeds in doing just that. This kind of intersectionality could already be found on the opening night. The founding of the iconic American label Blue Note 80 years ago is being commemorated through concert series worldwide. London's take on the tribute involved a well curated program of classics from the label's catalogue, reinterpreted by musicians associated with a particular section of the city's young creative ecosystem. Total Refreshment Centre, a multi-purpose studio in North London, isn't even a decade old but it's become one of the capital's significant gravitational points. Three bands that are part of TRC's orbit were on the bill, and each offered their own take on the music of some of the masters who shaped Blue Note's sound.

Some originals were part of the set lists, but this was mostly a night of covers. The seven-piece unit Free Movement Ensemble offered a remarkable reworking of "Oriental Folk Song," turning the beautiful modal melody from Wayne Shorter's classic album Night Dreamer into a spacey prog piece. Shorter reappeared again in the following set, although in an altogether different disguise. This time it was composer and producer Emma-Jean Thackray's nu-jazz sound that had given him a makeover, and just like that, "Speak No Evil" became a techno track. Standards were again being revisited in original ways by talented young musicians who clearly knew, understood and loved them for what they were, but weren't afraid to shake them up. Many great names made an appearance in the repertoire, from Freddie Hubbard to Donald Byrd, but the most mentions over the course of the night went to the great vibraphonist Bobby Hutcherson, who recorded over 25 albums for Blue Note.

The last band on stage brought things back closer to bop basics with some hard-hitting spiritual jazz. Led by promising newcomer Rosie Turton on trombone, the band was billed as a TRC supergroup uniting members of Turton's quartet and Maisha. This wouldn't be the last time the trombonist took to the stage over the course of the festival. That same night, straight after the set, she had to be escorted over to the Royal Institute of British Architects for a BBC 3 live session, where she performed some tracks from her debut Rosie's 5ive. A few days later she was opening for Makaya McCraven, who's beat-driven fusion music is very much in line with the sound of London's young vanguard, some of whom are collaborators on the Chicago drummer's recent albums such as Universal Beings. A logical Pairing.

There would be many more opportunities to see some young local talent over the festival's 10 days. Free events on the last weekend at the Royal Docks showcased many of the new acts contributing to London's jazz buzz, which the highly successful grassroots education programme Tomorrow's Warriors has been instrumental in fostering. Tomorrow's Warriors Takeover brought together three bands associated with the programme, including 2018's BBC Young Jazz Musician of the Year, Xhosa Cole, over a 4-hour afternoon set. Groovy fusion unit PYJAEN were also on the bill, and the Saturday was capped by a set from Steam Down, a community-driven artist collective based in Deptford, South East London, whose weekly events have already developed a unique cult following. Jazz it would seem is getting a new lease on life in these parts.

But of course, as you'd expect from an event as ambitious as this one, it's not just the young new innovators you'll get a chance to see. It doesn't get much closer to jazz royalty than Herbie Hancock and unsurprisingly, his concert at the Barbican Centre was among the first to sell out. The audience's ecstatic welcome and final standing ovation said it all. Hancock remains one of the greatest. His playing is still sharp. His sense of experimentation is unhindered (the cavernous synths at the start of the concert sounded more like a Klaus Schulze track than an opener from one of post-bop's great pioneers). And finally, he's still got that sense of showmanship, assuredly cruising the stage with his keytar, and offering a crowd-pleasing set that included major hits such as "Chameleon" and "Cantaloupe Island."

When you count Miles Davis among your closest teachers, you must certainly appreciate the value of such mentorship. At 79 years of age (you'd never guess given how he skipped excitedly onto stage), Hancock has long since embraced the other role, taking under his wing some of the best and brightest among the new generation of jazz musicians. 24-year-old flautist Elena Pinderhughes was one of those by his side. Having toured with the likes of Christian Scott (also in the festival's line-up) from a young age, she's undoubtedly one of the rising stars on her instrument, performing with characteristic confidence and perfectly riffing off the master's smart and subtle comping that always succeeds in injecting fresh thematic ideas into the mix.

As he approaches his 80th birthday, Herbie Hancock legacy is unmatched. He wasn't however wearing the crown for seniority. Another living legend to be honoured by the festival, albeit a more iconoclastic one, was Brazilian multi-instrumentalist Hermeto Pascoal, who was among the headliners at London's iconic jazz club, Ronnie Scott's. His performance was mesmerizing, his 83 years of age notwithstanding. As a composer he is tireless, even performing a piece he had written that same day on a napkin, which his manager proudly got out for all to see. His inventiveness and versatility were on full display as he guided and exhorted the exceptional group of instrumentalists surrounding him. He sang (at times shouted), on his own or into a flute, and carved erratic and angular piano lines onto a backdrop of entrancing and often otherworldly latin grooves.

As the compositional napkin was on display, Pascoal encouraged the audience to take photos and share them so that other musicians could play it and make it their own. Transmission is a key element in the lifecycle of any form of music, and that's just what a festival such as this is all about. Transmission to new audiences. Transmission between musicians, generations and styles. That kind of bridge building informed saxophonist Marius Neset's Viaduct which he performed at the Queen Elisabeth Hall. The expansive two-part piece performed with the London Sinfonietta carried the audience through Stravinskian rhythmic maelstroms, quiet atonal landscapes and exuberant symphonic jazz. "For me music can give associations about how you go from one world to another and it's all about the way things are connected and how you can make it into something meaningful. The reason it's called Viaduct is that this is about a connection to different musical ideas." There was a myriad of musical ideas, old and new, to be heard over two weeks across one of jazz music's oldest capitals, London. Today the city is again at the forefront of new movements whose maturation we can excitedly observe and take part in. Bring on 2020.

I'm originally from the UK but currently living in Toulouse, France. My background is in physics and information technologies, and today I work as a freelancer.