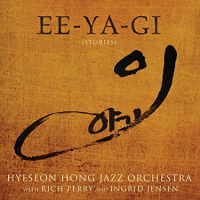 While Hong salutes her heritage at various points along the way, she proves on every number her conclusive grasp of traditional western jazz, writing themes whose handsome melodic and harmonic framework is nourished by an abiding sense of swing as epitomized by large ensembles from Fletcher Henderson and Duke Ellington through Basie, Herman, Buddy Rich, Jones-Lewis and others of that breed. As the album's title denotes, Hong's writing is largely thematic, ranging from Thanksgiving ("Harvest Dance") to youth and love ("Friends or Lovers"), long- lost friends ("Para mi Amigo Distante"), her Korean heritage ("Boat Song"), girlhood memories ("Disappearing Into Foam"), first love ("Love Song") and even the idiosyncrasies of an unruly dog ("Trash Digging Queen").

The opening "Harvest Dance," inspired, Hong writes, by a traditional Korean rhythm, encompasses bright solos by Jensen and trombonist Ron Wilkens. Alto Ben Kono, guitarist Matt Panayides and Matt Vashlishan on EWI are the soloists on the light-footed "Friends or Lovers," Kono (soprano) and tenor Jeremy Powell on "Para mi Amigo," which dances to a breezy Latin groove. Perry is showcased on the eastern-oriented "Boat Song" (which includes a wordless vocal by E.J. Park and Subin Park) and solos again on the playful "Trash Digging Queen." Pianist Broc Hempel is the lone improviser on the lyrical "Disappearing into Foam" (with more wordless vocals), trumpeter Jensen on the warm and even-tempered finale, "Love Song."

As one whose path lies mostly on the horizon, Hyeseon Hong has served notice with EE-YA-GI that hers is a voice to be hearkened to and applauded within the ranks of contemporary big-band composers and arrangers. Well done.