By DAVE WAYNE
September 6, 2014
Sign in to view read count 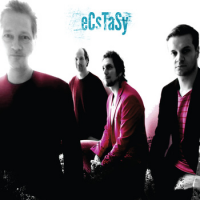 For me, guitarist Raoul Bjorkenheim is one of those musicians whose albums are always the subject of eager anticipation. His playing is both emotionally cathartic and intellectually gratifying. His highly-charged, utterly distinctive and immediately recognizable sound has been at the center of a number of fascinating cooperative groups over the past few years, including Scorch Trio with Paal Nilssen-Love and Ingebrigt Håker Flaten, the quartet Krakatau and ad hoc groupings with the likes of Hamid Drake, William Parker, Bill Laswell, Ståle Storløkken, and Morgan Ågren. As you may have gathered from these previous associations, Bjorkenheim is the sort of musician who keeps company with other really interesting musicians, thus creating rare synergy in both live and studio recordings. Bjorkenheim's latest project, an all-Finnish group called eCsTaSy, manages to be just as adventurous as any of his forays with the aforementioned groups. Yet, on their self-titled debut, Bjorkenheim indulges in the most lushly melodic, emotionally direct music he's documented since his days as a member of Edward Vesala's Sound and Fury band.

A quartet with veteran drummer Markku Ounaskari and two young musicians he encountered while teaching at Helsinki's Sibelius Academy; multi-reed player Pauli Lyytinen and bassist Jori Huhtala, eCsTaSy's music is a roiling torrent of free jazz, African polyrhythms and hardcore punk attitude. As is his custom, Bjorkenheim has chosen to work with musicians who value passion and visceral expression over the mere display of chops. That said, every member of this group is a complete monster.

The album opens with "El Pueblo Unido," a soaring, anthemic, rhythmically free piece that recalls some of Charlie Haden's work with the Liberation Music Orchestra. Bjorkenhein starts right in with an utterly heart-wrenching improvisation, over skittering drums and turbulent strummed acoustic bass. No less visceral, "Sos" presents another side of Bjorkenheim's musicianship. A brawny, tightly-composed post-post-bop piece, "Sos" gives saxophonist Lyytinen and bassist Huhtala an ever-shifting backdrop for expressive, unpredictable improvisations. "No Delay" is similar, though freer rhythmically and somewhat less urgent, with Bjorkenheim and Lyytinen trading phrases as bass and drums dance around one another. By the time Bjorkenheim starts his solo, the music sounds a great deal like a lost Scorch Trio session. "As Luck Would Have It" is a diamond-hard slab of jazz rock with that culminates in a screaming slide guitar solo. The uncharacteristically brooding, Nordic-sounding "Threshold" starts out as a pensive ballad, only to catch fire under Lyytinen's tenor before returning to the theme. The album closes with "The Sky is Ruby," another anthemic melody that wheels and soars over a tersely swinging rhythm section.

The more abstract side of Bjorkenheim's art is also well-represented on eCsTaSy. There's a wry humor to these improvisations that makes them a real pleasure to listen to. "Subterranean Samba" juxtaposes polyrhythmic, junky-sounding percussion with ring-modulated guitar, bowed bass, and squealing saxophone in a workout that recalls some of Elliott Sharp's work with his group Carbon. "Through the Looking Glass" evolves from a solo soprano saxophone piece into a pointillistic, contrapuntal, low-volume improvisation. As the name suggests, "Deeper" explores the nether reaches of everyone's respective instrument.

El Pueblo Unido; Sos; Deeper; No Delay; Through The Looking Glass; As Luck Would Have It; Subterranean Samba; Threshold; The Sky Is Ruby.