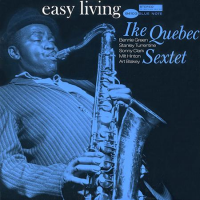 Ike Quebec is one of those funny figures in Blue Note Records' history. By the late fifties, after he'd been out of recording for a number of years, he was too old to really be at the hard-bop vanguard (he was born in 1918) but not old enough to be a senior statesman like Coleman Hawkins or Duke Ellington. Much of his involvement with the record label in those years was as an A&R man, scouting for new talent for the label's owner Alfred Lion. Considered in the context of musical fashion it might be fair to say that, at the dawn of the 1960s, his own musical style was a little dated, even passé.

But to hell with fashion; Quebec was a terrific musician and wonderful, big blue tenor saxophone (and occasionally piano) player. His chops might have been rooted in the swing of the late 1930s and '40s but, as the saying goes, good taste never goes out of style.

Music Matters has re-mastered Quebec's last outing for Blue Note, Easy Living, on two 45RPM vinyl records. Recorded in 1961 but released posthumously in 1987, the date features classic Rudy Van Gelder recording sound, recaptured from the original master tapes on state of the art equipment. As with all of the Music Matters Blue Note reissues, the goal is to create an all- analog record with the best possible sonics.

The first disk adds Stanley Turrentine on a second tenor, and Bennie Green on trombone. These tracks are tight and well-written, with excellent solos from both Quebec and—with a more 1960s modern playing style—Turrentine. The opening "See See Rider" is a greasy slow chitlin circuit blues that sets the tone for the whole record. It's hard to go wrong with Mr. T on anything, and Sonny Clark's comping and occasional fills are shear perfection.

But the real meat of the album is on the last three tunes. Turrentine and Green bow out, leaving Quebec in the sole spotlight. His tone is warm, smooth and full, and his balladeering is second to none. "Nancy" possesses the kind of playing that never grows old: tender and emotive, but powerful too. It doesn't hurt that the recording captures the saxophone with exceptional realism, even if the overall recording retains that period Blue Note sound. The title track closes the date with more brilliant slow play, with Quebec showing his period roots. It's clear that he came from the school that began with Coleman Hawkins and later begat Lester Young and, especially, Ben Webster. That's a favorable comparison and Quebec plays as well as any of them.

It's sad to note that within a year of recording Easy Living, both Quebec and Clark would be dead (Quebec from lung cancer and Clark from fast living). But the record is testament to the shear quality of their talent. Some recordings are timeless, and this is one of them. Easy Living is a record always worth hearing and appreciating.