BY EDWARD BLANCO
September 13, 2009
Sign in to view read count 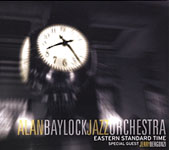 Recording standards always presents challenges to an arranger who looks to distinguish the new product from what has been heard before. Enter Baylock, who accepts the challenge of redesigning music by such giants as Duke Ellington, Victor Young, Cole Porter, Jerome Kern and Ray Noble. "I love taking a standard tune that everyone knows and completely re-working it" states Baylock, and to this end such classics like "Caravan," "Stella by Starlight," "On Green Dolphin Street," and the immortal "Body and Soul," are reenergized and come alive with newfound force.

Bergonzi wields his mighty tenor voice on the muscular opener "Caravan," and is further showcased on the brassy "Stella By Starlight," providing well-placed meaty solos. He begins to deliver a more subdued performance on the soft Ellington ballad "Warm Valley," but then takes off with flying solo phrases for what is one of the highlights of the album. While Bergonzi is presented as the featured artist, Baylock's ensemble—comprised of players from the premiere US Military jazz bands (Airman of Note, the Army Blues, and the Navy Commodores) including renowned drummer Steve Fidyk—delivers a powerful performance of its own.

There's a host of exceptional solos from various members of the band, including altoist Andy Axelrad, baritone saxophonist Doug Morgan, trombonist Joe Jackson and pianist Tony Nalker, who display more than adequate chops on such standards as "Oleo," "Love For Sale," "All The Things You Are" and the blistering "On Green Dolphin Street," where Morgan tears it up. In a testament to Baylock's arranging skills, Edward Heyman's "Body And Soul"—traditionally employed as a vehicle by tenor saxophonists attempting to put their own unique stamp on the music—features Jackson and pianist Harry Appleman, giving it a new texture. Perhaps the most ambitious number is Noble's "Cherokee" which Baylock transforms into a rousing, twelve-minute big band arrangement.

Serving up timeless jazz standards in a commanding fashion, Eastern Standard Time delivers a thundering big band performance from the power-packed Alan Baylock Jazz Orchestra—without a doubt, one of the finest jazz ensembles in the business.

Caravan; Stella By Starlight; On Green Dolphin Street; Body and Soul; Oleo; All The Things You Are; Warm Valley; Love for Sale; Cherokee.