BY DOUG COLLETTE
September 13, 2009
Sign in to view read count 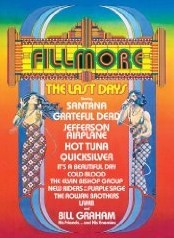 The growing wave of reminiscence around the 40th anniversary of the 1969 Woodstock festival may be just the beginning of a nostalgia tide for this golden era of rock. Fillmore: The Last Days chronicles not just the music but also the burgeoning rock business of the time, a period of growth that nonetheless saw the closing of the famed venue in 1971.

And venue singular it is, because this colorfully packaged DVD, including astute Ben Fong Torres liner notes inside a fold-out poster(which would benefit from photos both sides), covers only the West Coast venue, not its East Coast counterpart. Not that this content would have been a whole lot different as much of the video focuses on the acerbic but big-hearted impresario Bill Graham—he carried his alternately hard-nosed and humorous attitude with him from coast to coast—but the music itself might have been markedly different.

That said, the selection process would not have altered appreciably. San Francisco-based groups at every tier of fame, from Lamb and Quicksilver through Hot Tuna, Grateful Dead and Santana, perform some of their best-known material. The latter band stands out for beginning to reveal their foray into the jazz realm by covering trumpeter Miles Davis' " In A Silent Way." As the final track here, it accentuates the eclectic range of music that includes bonafide r&b in the form of Cold Blood, as well as the folk-rooted exotica of It's A Beautiful Day and their haunting "White Bird." And that's not to mention the authentic blues of The Elvin Bishop Group playing Elmore James' "The Sky Is Crying:" while there were elements of this movement that took itself too seriously, the music nevertheless benefited greatly by that approach.

Interviews with Bill Graham (and impromptu scenes with artists such as the late Michael Bloomfield), depict the history of the San Francisco rock scene because the man was there at the very beginning in the mid-1960s, and helped in no small way to nurture the growth of its music. Shots of the show posters arrayed on the walls of Graham's office may well pique the curiosity of those with more than passing interest in the history of this movement (much of which is now available for investigation at Wolfgang's Vault.

Given the fact these dozen plus performances, including a couple of rehearsal segments, were culled from five nights of concerts, it seems odd that in rescuing the film from its long out of print status, there was not a plethora of additional performances and special features (such as present-day interviews with musicians) for DVD release: a single 90-minute plus disc might seem to be just about half of what might have been prepared for reissue.

There are no truly galvanizing performances, but Jefferson Airplane's is a highlight for the streamlined take—the nifty segue from reminiscences as well as the multi-screen shots and overlays made fashionable by the film of the Woodstock festival. As in the footage of The New Riders of the Purple Sage, with Jerry Garcia on pedal steel, the correlation with the current jamband scene is unmistakable. Shots from nearly four decades ago unfold of the small theatre and the rotating participation of musicians.

Fillmore: The Last Days is the product of a collaboration between Rhino and The Bill Graham Memorial Foundation, a fusion of history and charity that gives the lie to the bitterness that pervades some of the later scenes on the DVD.