By KARL ACKERMANN
February 22, 2015
Sign in to view read count 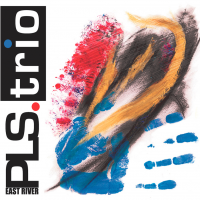 The acronym that gives name to the PLS. trio is from the very gifted young Italian pianist/composer Pier Luigi Salami. Together with his American rhythm section, consisting of bassist Martin Fowler and drummer Shawn Crowder, the New York based trio have released an enormously winning debut with East River. The international make-up of the trio is reflected in this debut which is neither European nor American in style but rather a balanced modern jazz approach subtly enhanced with airy electronic effects.

The twenty-something band comes to their debut with a fairly clean slate. Salami, Fowler and Crowder are 2010 Berklee College of Music graduates who have racked up playing time mostly with local artists in and around the North East. As a trio they have toured in Europe and played a number of other international dates. Their relative inexperience on paper is completely erased by skills that rise well above the norm.

"Yellow's Not Just a Color" and "Trieste"—more than other compositions—draw understandable comparisons to two self-identified influences; the former tune being in the vein of guitarist Pat Metheny and pianist Lyle Mays, and the latter, the Esbjorn Svensson Trio. Wherever such influences are present, they are more understated distinctions than a prescribed mindset. " Life of a Dugong" (a type of manatee) struts its way into high gear with some energetic solo playing from Crowder and Salami and "Into the Skyline" is similarly filled with drama and vitality. For contrast, Salami treats the more narrative "Once Again" with stronger emphasis on classical elements. The title track is an eleven-plus minute masterpiece of alternating moods and themes.

"Twice"—which closes the album—also features the sole vocal performance. A lone vocal could easily seem out of place in such a highly engaging instrumental set but is very appealing and a beautiful way to end the album. The singer/songwriter Woodsy Rain is a find with her unique voice and completely charming and off-beat performance. It's Fowler's subtle guidance here, as throughout East River, that ties some complex ideas and directions together with a deft and elastic touch.

Given the preponderance of piano trios, it is easier for the format to appear as a commodity than to articulate a point of differentiation. The PLS. trio has not only distinguished themselves but they may be one of the best in this category in many years. Taking a disciplined approach to alternating and blending improvisation and structure, East River is an auspicious and invigorating debut from a trio that has great potential.

Yellow's Not Just a Color; Life of a Dugong; Once Again; Trieste; Deep Blue; East River; Reflections of Silence; Back Home; Into the Skyline; Twice.