BY MARK SULLIVAN
February 22, 2015
Sign in to view read count 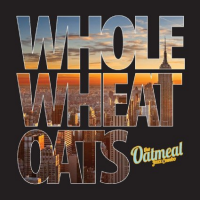 The stylistic focus of The Oatmeal Jazz Combo is well-summarized by one of its song titles: "Straight-A-Head." Ever since the original members met at New York's Stony Brook University the band has shared a passion for mainstream jazz, and the chemistry they found playing together (the "oatmeal" in the group's name refers to the beige soundproofing in the Stony Brook music department's basement rehearsal space). The members have become geographically dispersed since then, but manage to get together periodically, their persistence winning the attention of Downbeat, which profiled them in June, 2013.

Whole Wheat Oats (LGY Records, 2015) the group's fourth album, is made up mainly of group originals, with bassist Tristan Eggener accounting for the lion's share (five) of its ten tracks.

The band really hits its stride on "Smug," which could just as easily be titled "Swing," with its round of solos—just like Art Blakey's The Jazz Messengers in their prime. That classic Blue Note sound carries over into the following "Fat Cow." "Straight-A-Head" actually reaches further back, with a bit of a traditional jazz flavor, courtesy of the brass front line. The album's sole cover is a real change of pace: celebrated Cuban composer César Portillo de la Luz's romance song "Contigo En La Distancia" ("With You in the Distance") is a refreshing, unusual choice. It's well-arranged by bandleader/percussionist Leander Young, but vocalist Natalie Mallis seems to struggle with it a bit. It also features the first appearance of steel pan player Leon Foster Thomas. Having never been a fan of the instrument, his fine solo here completely won me over.

"Sunday Afternoon" features Timorris Lane's vocal contribution, as well as a flute solo from Evan Schwam (who plays tenor saxophone on most tracks), both well-suited to the mellow tone implied by the song title. Guitarist Kenjiro Miyagishi gets the spotlight on his own "It's Like A Dream," which also includes another steel pan solo. "What It Is" brings back Mallis, who ends the song scatting and trading fours with trombonist James Hubbard. Reminiscent of "I'm In With the In Crowd," Hubbard's "Bone Daddy" again features the trombone, of course.

There's still a place for mainstream acoustic jazz, and the Oatmeal Jazz Combo is there to provide it.