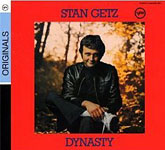 Verve's Originals series, which in late 2008 brought us tenor saxophonist Stan Getz's wonderful box set The Bossa Nova Albums (Verve, 2008), follows through with a remastered reissue of Dynasty, a double album recorded in 1971, a decade or so after Getz gave jazz its final, sustained hurrah in the pop charts with bossa nova. Relatively little known in the US, in part because the quartet which made it was refused permission to perform in the country, Dynasty is an enduring one-off deserving of attention by any discerning Getz fan.

The admirable Originals series is a no-frills affair which doesn't run to newly written liner notes, so a little background on Dynasty, and the group which recorded it, is in order.

The album features Getz accompanied by the Paris-based trio of organist Eddy Louiss, guitarist Rene Thomas and drummer Bernard Lubat. Getz had heard the group perform at the city's Blue Note club in summer 1970 (he was in France to watch a tennis tournament), was knocked out by their "hard, swinging jazz" and invited them to record with him. Rehearsals took place in Paris in the autumn and the quartet debuted at the Le Chat Qui Peche club in December.

In January 1971, the quartet travelled to London and began recording Dynasty. After the first few sessions, Getz's father died, and the saxophonist returned to New York for the funeral. Back in London a week later, Getz decided to complete the album during a residency at Ronnie Scott's club in March. It's likely Dynasty became a double album after the decision was made to record it live (though it's possible a couple of the shorter tracks come from the January studio sessions). The quartet toured Europe extensively during 1971, but was prevented from appearing in the US by the American Musicians Union's refusal to allow the three European musicians to perform in the country.

Produced by George Martin, with superb sound and presence, and very little extraneous audience noise, Dynasty is a red-blooded, muscular set in which Getz once again defies the ill-conceived notion that he was ever an effete or passionless player. He solos with transporting lyricism and at full throttle throughout, propelled onward by the superb accompanying trio. Louiss and Thomas each make memorable use of the generous solo time they're given. The exuberant Louiss has the drive of Jimmy Smith combined with a touch of contemporary acid-rock organ (check Brian Auger Trinity's "Season Of The Witch" for resonance). He's also a sensitive accompanist with a finely tuned feel for dynamics, who never overpowers a soloist. Thomas' cascading, cleanly articulated, single-note runs are in a clear line of descent from Getz's one-time colleague Jimmy Raney, with a dash of gypsy jazz thrown in.