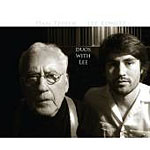 This record is reminiscent of Miles Davis' Kind of Blue (Columbia, 1959)—not historic, like that legendary record, which set modal jazz in motion—but very likely similar to that session, that must surely have been charged with near-ceaselessly flowing ideas. Duos with Lee comes from the hearts, minds and fingers of pianist Dan Tepfer and alto saxophonist Lee Konitz, both musicians who have performed on similar projects before—if not in duo settings then trios at least. Konitz did a magnificent record with Charlie Haden and Brad Mehldau—Alone Together (Blue Note, 1997)—and, in a shorter career, so has Tepfer in 2008, also with a trio. Duos with Lee breaks fresh ground fifty years after Davis' album was first released, but that is just a coincidence. Surely none of the musicians had that in mind; both are brimful with their own musical invention that must have been hard to stop once they got going.

So this is a modal record, but it must not have begun there. A visual seems to appear: two musicians, minds locked, synchronized, discovering a key, and then there is a proverbial outpouring of ideas and music as the "Elande" suite takes shape. A short improvisation, a dialogue where piano and alto sax feed off each other takes shape. It appears silly to stop now with the tape running, and "Elande" begins to take twists and turns surprising all present including the musicians themselves, with the seemingly unlimited flow of ideas. One key leads to another. From F# to Bb, then A, B, D, G#, F, G and E. And then there's the tenth part, "Free for Paree," that stems from a wonderful turn into the romantic "The Last Time I Saw Paris."

There is an element of challenge here. Can it be done in every key of the scale? Would it be rudimentary? How would it develop? That last idea lends itself to this music: proverbially, the sound of surprise. And here, in this suite, there is one moment after another. It is like a heady mix of swinging, dancing notes. The sonority and softness of Tepfer's dynamics, as his fingers meet the keys and ideas take shape, and the dry resonance of Konitz's alto. Sounds emerge like waves on an emerald ocean, wet and dry, happy and elementally sad. The experience is cathartic, the music so complete that it is like putting a full stop after it is done, with "Elande No. 10 (Free for Paree)."

Equally wonderful is the tender portrait," Merka Tikva," and a spectacular interpretation of an old folk song, "Trees." Finally, "No Lee," which developed while the altoist was on a break, with a soaring melody that Tepfer develops in swathes of harmonic ululation. It is the shape of things to come from Tepfer, who is allegedly recording Bach's "Goldberg Variations." It would be very interesting to hear what this record will bring.