BY MIKE OPPENHEIM
April 7, 2013
Sign in to view read count 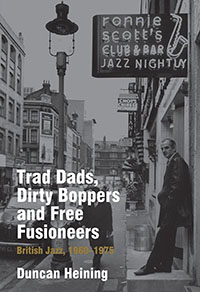 Trad Dads, Dirty Boppers, and Free Fusioneers: British Jazz, 1960-1975, by freelance writer Duncan Heining, is a significant addition to the jazz literature. Consisting of fourteen chapters and 450 pages of text, Trad Dads focuses on the unique circumstances surrounding British jazz in the 1960s and first half of the 1970s. Heining investigates jazz as a musical, cultural, and economic phenomenon in the context of contemporary social realities in the United Kingdom. By comparing and contrasting the British jazz scene with its equivalents in continental Europe and the United States, the author makes a convincing argument that British jazz exhibits a unique and distinct history, evolution, value system, and musicality. Heining debunks any notion that British jazz of the period was merely an imitation of American jazz, either musically or culturally.

Though the book is quite dense, and the writing academic, Trad Dads should appeal to a wide cross-section of the jazz audience. It is a remarkable and comprehensive account of British jazz of the period, but its approach to the music in a cultural context provides value for researchers of any locale or period. For more casual readers, the personal accounts of the musicians, and the extensive reviews of significant artists and albums, make this an excellent reference for anyone interested in building a collection of British jazz. The index is extensive, so the material is easily navigable, and the Appendix contains a list of "100 Essential British Jazz Records, 1957-1976," many of which are reviewed in detail in the text.

The primary themes running throughout Heining's account concern British jazz as a distinct entity from its American and European counterparts, as a commodity in a market economy, and as a reflection of the socio-political climate and issues of Britain in the 1960s and '70s.

In addition to a brief history of British jazz and the distinctions between "trad" and modern jazz, there are chapters dedicated to the impact of the rise of the British middle class, increased educational opportunities, the commercial concerns of record labels and jazz clubs, and the rise of pop culture and rock music. These first six chapters illustrate British jazz as an imported product evolving in unique circumstances, drawing upon local influences and events to chart its own developmental trajectory.

Chapters seven through ten consider issues of drug use, racism and racial tolerance, immigration, and sexism. Interestingly, the anecdotal and demographic evidence cited seems to imply that the jazz scene was an unusually tolerant and open segment of society in a period of considerable social unrest. These chapters, and the musician's accounts contained within, provide an insight into what it was like inside this culture.

Chapter eleven, devoted entirely to the "free jazz" or "free improvisation" movement, may be the highlight of this publication. Drawing upon the accumulated picture of British jazz, and an overview of contemporary philosophical and psychological approaches to concepts of freedom and basic human rights in the wake of World War II, Heining depicts the free movement as a direct result of, and reaction to, the period. He argues that free improvisation in Britain was independently developed in response to its unique social and political climate. Though contemporaneous with similar experiments by American artists, the British analogue was distinct and functional, not imitative.

The final chapters address government arts funding, the (perceived) association of jazz with left-wing or radical politics, and commoditization of the art. Heining identifies many challenges in drawing conclusions or making definitive statements about British jazz from the '60s and '70s. For instance, while certain musicians were active in progressive political activism, Heining correctly cites the danger in assuming that this reflects jazz musicians, audiences, or the community as a whole. Or, similarly, the urge to identify jazz as any kind of anti-capitalist or counter-cultural movement is complicated by the fact that it functions as a product in a market economy.

Heining admirably draws on contemporary jazz resources and interviews, sociological and political theoretical constructs, and aesthetic analyses to produce a work of considerable value for jazz fans and scholars. His conceptual model allows for a gradual depiction of the British scene as a unique entity in the jazz world, and his passionate and insightful reviews of the many recordings discussed will peak an interest in British jazz.