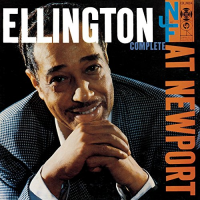 Within the subatomic structure of American musical styles, the blues is the single indivisible particle with which all else is made. The blues combined with other influencing elements (eg. ethnic, religious, regional, cultural) form Country & Western, Bluegrass, Rock & Roll, Rhythm & Blues, Soul, Funk, Gospel and, yes, finally Jazz. It can be argued that the blues as expressed through Jazz is as much the pinnacle of artistic expression as Beethoven had reasoned Opera was. Within the realm of the blues as a subatomic part of Jazz, there have been several prominent theorists. Certianly this group would start with Joe Oliver and Louis Armstrong and would progress through Bix Beiderbecke Art Tatum, Charlie Parker, Charles Mingus, Miles Davis, and the list goes on and on and on. Arguably the most poetic blues practitioner was Edward Kennedy Ellington. Few composers could do more with those tired twelve bars than the Duke.

In the mid-1950s, Duke Ellington and his well-established big band had hit a career lull. At the end of an unsuccessful stint with Capitol Records between 1953 and '56 and following several key defections from his band, Ellington and his group were in need of revival, a comeback. Critically speaking, Ellington had already established himself as America's most important composer of any type of music in the 1930s and '40s. But, in the mid-'50s the near-death knell of Jazz was percolating in the guise of Rock & Roll. Bill Haley, Buddy Holly, Chuck Berry, The Beatles, and a host of other artists were waiting in the historic wings for their fifteen minutes to change the universal face of music. No Jazz musicians were immune to the popular threat posed by Rock, not even the titan Ellington. Additionally, other Jazz styles were beginning to gain prominence. Be Bop was reaching its twilight in the middle to late '50s, after the death of Charles Parker and was still very popular. Hot on Be Bop's heels, Hard Bop was beginning its incubation in the small combos of Horace Silver, Art Blakey, and Miles Davis. West Coast Cool was also having its genesis in San Francisco and Los Angeles clubs. Big Band Music and Swing were in danger of losing relevance as well as notoriety.

In spite of the introduction of Rock music and the changes in Jazz, Ellington would prevail. On the night of July 7, 1956 at the Newport Jazz Festival, after a series of thunderstorms had dampened the collective spirits of the Eastern Seaboard patrons, The Duke Ellington Orchestra took the stage. There the band performed the National Anthem and reestablished itself and Ellington as the foundation upon which Jazz was built-Urbane genius and sophisticated improvisation.

Captured on tape, Ellington at Newport 1956 was to become Ellington's biggest selling recording. It is interesting to note that only about 40% of the original recording was actually live, the remainder being recorded in the studio to provide "patches" and filler for the less than perfect live portions. Kind of crazy by today's completist standards, but nevertheless a common recording practice right through the 1970s. Ellington at Newport 1956 (Complete) provides the original concert as a historic document along side the studio recordings. The comparison is startling.

Every article ever written about this recording froths over the 27 choruses. Ellington included his 1938 medium-tempo twin blues "Diminuendo in Blue and Crescendo in Blue." These two twenty-year-old musical clauses were separated by an "interlude" by tenor saxophonist Paul Gonsalves. Modestly talented, Mr. Gonsalves electrified the crowd with an R&B workout before R&B was R&B. This has long been considered the highpoint of the show. Today I certainly challenge that supposition, "Jeep's Blues" defines big band blues and its appearance here is certainly the most perfect big band blues on record.

"Jeep's Blues" was an Ellington vehicle for his premiere alto saxophonist whom the composer lovingly called "Rabbit." Johnny Hodges was one of Duke Ellington's most faithful band members and was rewarded with several compositions written specifically for him. Over the simple and familiar theme of the song, Hodges played the most embarrassingly sensual solos ever recorded. In addition, particularly in the final chorus, he perfected big band blues playing on the alto saxophone. The present recording offers what I consider is the greatest endorsement of live-recorded music. The live "Jeep's Blues" is loud and virile. With a testosterone-fueled swagger, this song builds a dense and perfectly balanced momentum. The studio version of this song is down right bashful by comparison as are Hodges' timid soloing. "Jeep's Blues" was the highlight-that in the face of fifty years of writing.