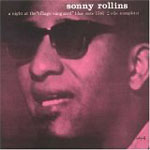 Located on 7th Avenue just below West 11th Street in New York City's Greenwich Village, the Village Vanguard has been the seat of live jazz since the 1940s. Ninety-one live recordings have been made at the Vanguard between 1957 and 2001, chronicling the whole of the history of jazz. What was the first live recording made at this fabled club, one might ask?

Sonny Rollins' A Night At The Village Vanguard.

By 1957, Sonny Rollins had already been on the New York jazz scene for a number of years. Born in the Sugar Hill section of Harlem, Rollins first studied piano before changing to tenor saxophone. After rehearsing with the Thelonious Monk quartet in late 1948, Rollins was to make his recording debut backing vocalist Babs Gonzalez on a 1949 recording. During that same year, Rollins appeared with Bud Powell and Fats Navarro. Throughout the early to middle 1950s, Rollins recorded with Charlie Parker, Miles Davis, Thelonious Monk, Art Blakey, The Modern Jazz Quartet, Coleman Hawkins, and John Coltrane. Rollins was a member of the famous Clifford Brown Max roach combo before Brown's untimely death.

Rollins recorded first as a leader on December 16, 1956 (Sonny Rollins, Volume 1 Blue Note 81542), though he has since been credited with about a dozen releases before this date, those including Saxophone Colossus and Tenor Madness. Sonny Rollins, Volume 2 (Blue Note 81558) was released in early 1957, followed by the pianoless trio date Way Out West (Contemporary/OJC 337), recorded on March 7, 1957. By the time November of 1957 rolled around, Rollins was ready to take his trio concept to the Village Vanguard and record the performances.

The recording that resulted documents two shows in the afternoon and evening of November 3, 1957. Rollins employed different bands for the two shows. The afternoon show sported Donald Bailey on bass and Pete (La Roca) Sims on drums and the only contribution to the whole by this band is the opening "Night in Tunisia." The remainder of the recording is all Wilbur Ware on Bass and Elvin Jones on Drums. the recently released rudy Van Gelder Edition is superior to all previous releases of this material. Included here is all of the pre-song banter showing a 27 year old Rollins wowing his crowd. Also, previously edited material is restored and situated in chronologic order.

All of this is dryly technical, but the music is not. This is virile and daring music performed with the hubris of youth and genius. The nakedness of the Tenor Trio is justly daunting. But, to masters of this ilk, the trio format offers that additional dimension of creativity— finding what is important in melody and harmony. Charlie Parker is barely in the grave two years befor these sides were cut. "A Night in Tunisia," "Woody 'N' You," and "I Can't Get Started" sound fresh and new. Rollins's tenor was always larger than life in a most attractive way, unlike Coltrane. His tone was full and sexy and rough and exciting on this evening in November, 1957, and so was his genius.