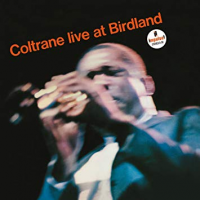 In the early morning of Sunday, September 15, 1963, a gaggle of malcontents planted 12 sticks of dynamite in a window well outside the 16th Street Baptist Church in Birmingham, Alabama. The dynamite exploded eight hours later killing Denise McNair, 11, and Cynthia Wesley, Carole Robertson and Addie Mae Collins, all 14, in the process galvanizing the Civil Rights Movement. Three months later, on November 18, 1963, John Coltrane stepped up to the microphone in fabled Englewood, NJ studio of one Rudy Van Gelder and over a McCoy Tyner Tremolo, blew his searing and definitive statement on the subject of the bombing— "Alabama." "Alabama" is the single most provocative piece on what is considered one of the most well rounded John Coltrane live recordings Coltrane Live at Birdland. The piece is most certainly why this Coltrane live recording was chosen for this series.

The odd thing is that "Alabama" and its sister piece "Your Lady" (also recorded in Englewood) are not even live recordings and the live recordings included on Coltrane Live At Birdland are not all that were recorded on October 8, 1963. Like many jazz recordings (particularly live jazz recordings) Coltrane Live at Birdland is actually a patchwork of recording events. The original release was comprised of 5 pieces, three recording in the club on October 8, 1963 ("Afro-Blue," "I Want to Talk About You," and "The Promise") and the remaining two ("Alabama" and "Your Lady") a little over a month later. The original vinyl LP was released in January 1964. The first compact disc release was 1992. The original recording was augmented with an additional song ("Vilia" recorded in Englewood, March 6, 1963) and re-released in 1996. Why the original recording was not re-released with all of the live pieces (versions of "Rockin ["Tranin' In"]," "Mr. P.C.," and "Lonnie's Lament") remains a bit of a mystery.

All of this begs the question-How are we to consider Coltrane Live At Birdland one of the best live jazz recordings? I suspect that we must forgive the imperfections of the disc (or those of the writer's premise) and accept the release as a complete work of art as we do other incomplete or otherwise imperfect endeavors such as Coleridge's Kubla Khan and Mozart's Requiem. In that, we might suspend our compulsive dependency on by-the-letter definition and turn our attention to the important thing, the music.

Coltrane Live at Birdland displays Coltrane's most famous quartet: McCoy Tyner on piano, Jimmy Garrison on bass and the thermonuclear Elvin Jones on drums. With respect to the saxophonist's constantly evolving style, Coltrane Live at Birdland falls squarely between Ballads and A Love Supreme and on those Birdland dates, John Coltrane does sound like he is passing through. The Mongo Santamaria standard "Afro-Blue" was long a Coltrane concert favorite. The 10- minute performance here is thought to be his best and most accessible performance of this piece. Elvin Jones's drumming is at its bombastic densest with great emphasis on the cymbals. The Billy Eckstein composition, "I Want to Talk About You" like "Afro-Blue" was a favorite performance piece for Coltrane and he recorded it more than ten times. Here, the piece has a riveting solo Coltrane coda giving light for things to come.

Down Beat critic John McDonough in his review of the last recorded public appearance of the tenor saxophonist (The Olatunji Concert: The Last Live Recording— Impulse! 314 589 120) echoed another critic in touting Coltrane as "Jazz's most boring genius." Coltrane's later music largely leaves me with the same feeling. I far prefer his Atlantic Hard Bop days when he was just beginning to transform jazz as Charlie Parker had done the generation before and before his vision reached light speed and his invention, critical mass. However, let there be no mistake. If the listener wishes to hear the master in transition, look no further than Coltrane Live at Birdland.