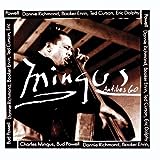 Charles Mingus. You just have to know that he would have nudged, cajoled, or bullied his way into the top of this list, even twenty years after his death. Mingus at Antibes is a kinetic, frenetic, dysthymic document of the genius of an overly stimulated, overly indulgent, and overly gifted personality. Mingus was not unlike Mozart in the respect that many of Mozart's contemporaries pondered why God granted such an undeserving imp such talent. So with Mingus. How could such a loud and obnoxious bully be given such talent. Well, I suspect that aptitude is provided those who might best exercise it, and Mingus certianly did so.

Recorded Wednesday, July 13, 1960, at the Antibes Jazz Festival, Juan-les-Pins, France, this recording is considered by many as Mingus's most popular. Mingus at Antibes would reach mythic levels well before this humble writer were to pen an epistle about it. Held on France's Cote J'Azur, Mingus biographer Brian Priestly noted, "The fact that Mingus was invited at all to an event that was principlly for European Bands [was] a little surprising, but it may not be connected with the role of the French record company Barclay, who not only issued an album of some European participants such as Dusko Goykovic and Albert Mangelsdorff but, as the local liscensee of Atlantic recorded on their behalf both of the American bands involved, [the] Wilbur DeParis 'New' New Orleans Jazz and Mingus."

A queer little setup, one might think. But, the music is of another dimension. Sure it is easy to conjure up the obvious— this music is based in the most basic of African- Americ tradtions— African polyrhythm, Americal Black Gospel, The Blues, Big Band. Mingus no more gave a shit about those titles than the man in the moon. He was out to make music. Perhaps a synthesis of all of the above, but his unique voice nevertheless.

Mingus At Antibes is an interesting statement in the respect that it has the feel of many other '50s and '60s live jazz recordings— i.e. that it was assembled from several pieces spliced together with no particular theme evident. But this is not the truth. This is the actual program Mingus performed. It was made up of material from basically the same period as the festival appearance. Where this material diverges from the studio versions is in its earthy soul. "Better Get Hit In Your Soul" and "Wednesday Night Prayer Meeting" are charismatic Pentacostal in the extreme. The listener can hear the band shout, "Amen!" at the end of every free-form chorus Mingus plays.

"Folk Forms I" is a blues in F and "What Love?" is Mingus's take-off on "What Is This Thing Called Love." The final track is "I'll Remember April" with a fraile but assured Bud Powell on piano. It is heartbreaking in an upbeat sort of way, much like Lady Day's Lady in Satin and Songs for Distingue Lovers. For Bud Powell's part it is genius at twilight (or burn out).

This is music as rich as the Red Mississippi Delta dirt and as refined as a Martini served in Greenwich Village's Village Vanguard. That it was performed in France is only a testament to the universality of the music. Mingus did not speak for only himself, but for everyone.