BY CHRIS MOSEY
March 20, 2017
Sign in to view read count
The legend of Duke Ellington—one of very few jazzmen worthy of the overworked accolade "genius"—continues to unfold four decades after his death.

In large part this is thanks to the efforts of Ellington himself. From 1950 to 1974, he kept a private "stockpile" of recordings made for his own pleasure... and with an eye on posterity.

Following his death on May 24th 1974, Duke's son Mercer donated this "stockpile" to Danish Radio. Since then producer Bjarne Busk has been working his way through it and—in something of a jazz "scoop"—recently unearthed a studio session of Duke playing solo piano, which has never before been commercially released.

The 16 numbers on the tape were recorded at Mediasound Studio, New York on August 25th 1972.

Supplemented by four tracks also recorded for the "stockpile" after a 1969 concert by the Ellington band in Rotterdam, this "new" recording by Duke has now been released on the small Danish Storyville label under the title "An Intimate Piano Session." The release coincides with the latest double album by Storyville of radio shows made by Ellington to promote the sale of US war bonds, which coincidentally also focuses on Duke's pianistic abilities. 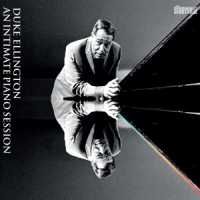 Recorded two years before Ellington's death, there's a reflective, sometimes even melancholic feel to these tracks. The opening number, "The Anticipation," first part of "The Uwis Suite," expresses the anticipation Ellington felt to be once again visiting Wisconsin. Uwis is Ducal shorthand for The University of Wisconsin.

The full suite was premiered earlier in 1972 at the Wisconsin Union Theatre in the state capital Madison.

A dreamy feel adheres to "Le Sucrier Velours (The Velvet Sugar Dispenser)," which when performed by the full orchestra, was sometimes retitled "Do Not Disturb," and featured Ray Nance on trumpet.

The mood changes. "A Blue Mural From Two Perspectives" has a subtle ragtime feel. Duke, not content with his performance, says afterwards, "This piano is too honest, it shows all my flaws, all my blemishes." Busk played the track to pianist/arranger Billy Moore Junior and asked his opinion.

Moore said that, while Duke was no Art Tatum or Teddy Wilson, he was more interesting than either of these two keyboard masters because of the substance of his playing: "You would listen to his piano and play it over and over again and be really amazed at what he was doing."

Duke took his two vocalists with him to the Mediasound Studio. Anita Moore battles to little avail with Don George's portentious lyric on "I'm Afraid Of Loving You Too Much" but does a much better job on the lighter "I Didn't Know About You."

The nadir of the session is reached with Tony Watkins' rendition of Ellington's self-indulgent tribute to his parents, "My Mother, My Father And Love," written for My People, a show staged in Chicago in August 1963.

The Rotterdam tracks feature Duke with Wild Bill Davis (organ), Victor Gaskin (bass) and Rufus Jones (drums). On "Satin Doll," Duke does his finger-snapping instruction monologue, offering advice on how to be "hip," which no one is anymore. It's simply not hip to be hip. 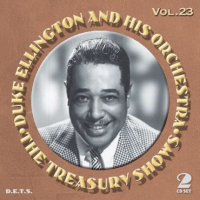 The latest Treasury Show reissue sees Duke playing solo piano on the first four numbers. These are his own compositions, "Mood Indigo," "Don't Get Around Much Anymore," "Sophisticated Lady" and "Solitude." It's a totally different ball game from the tracks on An Intimate Piano Session. The maestro is at the top of his game, polished to his fingertips and conscious of the royalties the songs will generate. The war is over, times are changing and the outlook for big bands is not good.

For the moment though he can enjoy playing with "the boys in the band." Cat Anderson demonstrates that he was much more than just a high note specialist on "A Gathering In A Clearing," the gospel-tinged number he co-wrote with Ellington and saxophonist Al Sears.

Kay Davis is best remembered for her wordless vocal on "Creole Love Call." The pop ballad "Cynthia's In Love," featured here, is a very different kettle of fish. It was only rarely performed by the band and -wisely -never recorded

There follows a rollicking rendition of "C Jam Blues," with compere Hank Weaver calling out the soloists as they step up to the microphone. The number sounds like an informal jam session but is actually quite carefully arranged.

Perhaps anticipating the arrival of the long-playing record a few years down the line, Ellington gives extended solo space to Taft Jordan on "Rugged Romeo," Johnny Hodges on "Magenta Haze," Oscar Pettiford (paying tribute to Jimmy Blanton) on "Jack The Bear" and Al Sears sounding like a precursor of Paul Gonsalves on the rarely heard "The Suburbanite."

CD 2 features a fine, rhapsodic version of "Warm Valley" by Johnny Hodges and sees Ellington paying tribute to W. C. Handy with three numbers by "The Father of the Blues": "Memphis Blues," "Beale Street Blues" and "St. Louis Blues." Jimmy Hamilton is to the fore on clarinet on the first two, while Marion Cox sings that she hates to see that evening sun go down as though she really means it.

Oscar Pettiford, Al Sears and Cat Anderson take solo honours on "Three Cent Stomp" before, on "Just Squeeze Me," Ray Nance does his inimitable vocal thing, following it up with a short solo reminiscent of a cavalry charge bugle blast. He repeats it all six tracks on as the broadcast draws to a close.