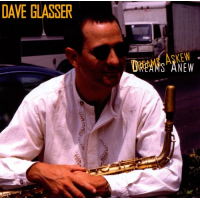 This is Dave Glasser's first album for the Artemis label. Previously, he was part of the Nagel Heyer stable having made two albums for them as a leader and numerous ones as a sideman. Of the young alto sax players on the scene today, few can match the purity of tone that Glasser gets out of the horn. It combines the sultry sound of Johnny Hodges with Stan Getz's out and out beautiful tone. Add to this a shred of the lightness of Paul Desmond and you have alto playing at its best. Glasser clearly has not been swayed by either Charlie Parker or John Coltrane. The Getz influence is apparent on an A Capella opening to "Love Letters". On the title tune, "Dreams Askew, Dreams Anew", the Hodges influence rules. But on all tracks, the playing is tasteful, sometimes bordering on elegant and stately, but always highly melodic... and he can swing. The light touch comes in especially handy when the tempo is upbeat, allowing the alto player to exercise his digital facility with excellent results as on "Moose the Mooche". The drums of Lewis Nash set the scene with an on the mark percussive opening. Glasser is accompanied by an outstanding rhythm section of Barry Harris, Peter Washington and Lewis Nash. Trumpet player Kurt Weiss shows on "Funny Money". Harris makes important contributions to this album with solos on "Focus", and an especially engaging one on "Don't You Know I Care", with Washington's lightly plucked bass providing the foundation. "Czakass" is a tongue in cheek, blusey tribute to one of the better recording engineers in the business, Jim Czak.

In a time when too many of the present generation of horn players seem to feel that they have to be strident to be heard, Glasser is a welcome oasis in a desert of dissonance. If you only buy one alto sax album this year, get this one.