Something of a socio-political scythe--a title and tool cutting straight into the failing system that surrounds us--Hypocrisy Democracy is also a broad statement detailing the ceaselessly looping fallibility of man and his actions. It's saxophonist Dave Glasser's most probing work to date, bound to both our present state of affairs and the history it mirrors, and it's an album that, despite its bold conceit, actually needs no concept to latch itself onto. The music is that strong. ...

There's nothing wrong with a little old school. Saxophonist Dave Glasser keeps it simple--no flash, no gimmicks. Glasser has spent many years as a sideman, performing with artists including the Clark Terry Quintet, the Count Basie Orchestra, Illinois Jacquet and the Dizzy Gillespie All Stars. He has also recorded several CDs as a leader. A native of New York City, Glasser is a master saxophonist, having studied under Lee Konitz, Frank Perowsky and Barry Harris.

Drawing on his admiration for ...

Alto saxophonist Dave Glasser might have been born at the wrong time. While he is performing and recording some terrific music in the 21st century, his stylistic preferences lean heavily on the music of the 1940s and '50s. Glasser spent ample time over the past two-plus decades performing with Clark Terry, Illinois Jacquet, and Barry Harris, learning about this music from the men who were there. While he continues to use this knowledge on the bandstand, he also pays it ... 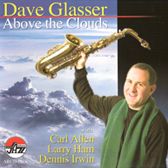 Alto saxophonist Dave Glasser may not be widely known in the world of jazz, but that will change in time. Above the Clouds provides all the evidence one would need to acknowledge that an important new voice is on the scene. This release is a quartet recording with a solid lineup of musicians, featuring Glasser on alto playing a half dozen of his original compositions.Glasser is an intelligent soloist with a wide range of resources. His solo work ...

Nat Hentoff, in his liner notes to Above The Clouds, doth protest too much in his discussion of jazz, with its supposed death in the States and its creative future in Europe, and then tying his categoric “No!" to icons such as Clark Terry and Jimmy Heath, and youngsters such as 13-year-old Grace Kelly. Wherever one's taste falls in the many streams of jazz, one should always acknowledge players who, while not being bleeding edge anything, have ...

I had the pleasure of hearing Glasser (along with Larry Ham) on an early 2006 Arbors album, Swinging The Blues, which was led by bassist Earl May. There, Glasser delivered most of the ...

Dave Glasser blows a sweet-sounding alto saxophone, and he swings hard and gets down into the blues on this quartet recording, which brings past alto masters Johnny Hodges and Benny Carter to mind. It's in the beautifully lyrical story telling of an alto horn in front of a fluid, subtle rhythm team.Glasser has played lead alto in Illinois Jacquet's big band and with the Count Basie Orchestra led by Frank Foster; he's also performed with a bunch of ...