By ROGER FARBEY
September 5, 2015
Sign in to view read count 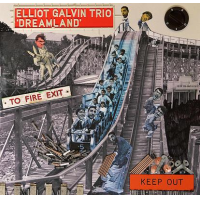 From the jokey toy piano start of "Ism" to the aborted boogie woogie of "Blues" where Galvin introduces a reflective change of mood, introducing a luxuriant chord-rich theme, it's patently obvious that this is no ordinary piano trio album. The pastoral "A Major" for example, one of the less frenetic tracks, nonetheless contains its own intriguing meanderings. This contrasts sharply with the succeeding, feistier "J.J." which is propelled by an insistent bass and drum-led rhythm.

The sparse yet resonant dynamics of tracks such as "13," "Waiting" and "Apollo 17" are reminiscent of the great early Howard Riley Trio records distinguished dually by power and sensitivity. The frenetic "Periodical Cicada" may qualify as one of the shortest tracks ever recorded, lasting a mere 15 seconds, but with a paradoxically large number of notes packed into it.

"Azaro" reverts back to toy piano with bass and drums, then moving into conventional piano with the strings muted by object unknown (a bottle?) to give a tinny effect. The net effect is superficially comedic but is underpinned by both skill and imagination, the final bars embellished by dramatic staccato chords.

"Lulu" is essentially Thelonious Monk on acid with some Erroll Garner thrown in for good measure. The final track, "Canon," to all intents and purposes, is a contrapuntal pastiche, played fast but gradually mutating into an accelerando ending, finishing at almost breakneck speed.

This first class debut album from a sublimely talented trio is indicative of great things to come. It is refreshing to hear a pianist of Galvin's calibre so able to tease (in every sense of the word) this highly original music into so many different shapes with such apparent ease. Notwithstanding the comical cover art and frequent humorous allusions, this is seriously good stuff. Most crucially, he avoids falling into the trap of trying to emulate everyone else.