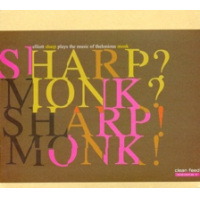 Polymath musician Elliott Sharp fears nothing creatively. He will as readily dismantle the blues into its atomic components as he will Western European classical music. Or jazz, for that matter. On Sharp? Monk? Sharp! Monk!, Sharp attempts the impossible, that is: a post-modern dissection of five Thelonious Monk pieces, played on guitar no less. Ex vivo Monk could be seen as one of the first musicians to apply post-modern method to music. Fearlessly, Monk readily expanded the tonal and harmonic landscape with crashing dissonances and shoehorned time figures. Monk's music makes for an ideal vehicle for the like-minded Sharp to take a leisurely ride in.

Released in 2006, Sharp? Monk? Sharp! Monk! emerges between two especially productive periods that saw Sharp leading his Terraplane blues project and his more classically-oriented material. Using only an acoustic guitar and his considerable wit, Sharp explores, at length, the bleeding heart of Monk's music. "Well You Needn't" provides him all the necessary room to find every speck of mad Monkian muse while adding a plethora of his own. String slaps and 64th-note hammer-ons are abundant and well placed. The warhorse "'Round Midnight" is transformed into the celestial creak of an abandoned rocking chair in an empty room of your odd aunt's house. Sharp develops Monk's well-worn figures slowly with great drama and plot making.

Sharp's Monk ruminations make for engaging listening, challenging the listener without scaring the s*** out of him or her. "Bemsha Swing" epitomizes the project readily displaying Sharp's keen sense of humor and honor for the jazz tradition of improvisation and pushing the envelope.