BY DAN BILAWSKY
December 23, 2015
Sign in to view read count 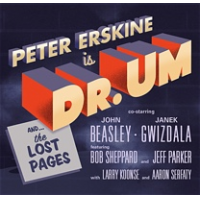 It would appear that this project has awakened the Peter Erskine of yore, the drummer who became legend while cresting the waves of fusion with Weather Report and Steps Ahead.

In recent years Erskine's drumming has been spare, elegant, open, and, in enough instances, lightly swinging. If one word would come to mind to describe that playing, it would be "tasteful." But does that automatically mean that joining forces with some plugged-in players and laying down some funk and fusion numbers is the antithesis of that ideal? Absolutely not. Erskine doesn't have a tasteless bone in his body. Musicality is of the utmost importance in his every groove, solo, fill, and mini-gesture, and he always plays for the situation at hand.

In this case, the situation requires Erskine to don the mask of Dr. Um, the man who knows how to point you toward whatever rhythmic prescription you seek. Looking for a soulful jam situation? You'll find it on keyboardist John Beasley's irresistible "Okraphilia." Hoping to find a direct nod to Weather Report? It's here in the form of a wonderful, sonically-updated "Speechless." Need a party piece? Look no further than Erskine's own "Hawaii Bathing Suit," a dance-friendly fusion-calypso hybrid that's non-stop fun. Is slick, understated funk more your bag? Then "Lost Page" or "Little Fun K" should fit the bill. Any and every musical question has its right answer, and every track gets the perfect feel from Erskine—not too economical, not too busy, and right on the money when it comes to style.

Most who were never smitten with fusion aren't likely to be won over by this date, but those in that group who were turned off mostly by its aggressive advances may take to this music. Erskine, keyboardist John Beasley, bassist Janek Gwizdala and several other notables, like saxophonist Bob Sheppard, demonstrate that fusion isn't really about muscle. It's about a readiness and willingness to bring different elements together, and Erskine does so beautifully on this album.