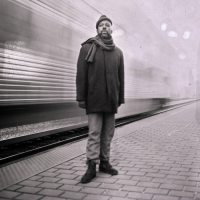 Within any given city you might hear birdsong and church bells competing with buskers, car horns and stereos. Within the realm of Ben LaMar Gay's debut album we run a similar gamut of sonic experience. A cornetist and composer from Chicago's South Side, Gay has worked with Jaimie Branch, Makaya McCraven and Joshua Abrams among others. Yet for reasons unknown, he has never made public some seven albums worth of his own recorded material. All that changes with the release of these fifteen tracks, picked out as favourites from Gay's back catalogue by family members.

They've chosen well too. A snapshot of Gay's passion for jazz, poetry, hip hop and electronica, Downtown Castles might be an audio portrait of Chicago itself. South America gets a look in too—Gay has worked in Brazil—as does the soul of movie soundtracks.

Opening cut "Vitis Labrusca" brings a metallic shimmer of noise, like a psychotropic subway journey. "Muhal," which follows, is an ingenious piece with rapping-tapping percussion, coiling synths and bursts of bass clarinet. Over this, Gay intones like a streetwise mystic, paying tribute to Muhal Richard Abrams, the Chicago piano legend who died in 2017. "Music For 18 Hairdressers: Braids & Fractals" then lays rapid upright bass over nervous rhythms, whilst "Jubilee" is pumped up Afrobeat and brass that shakes like a downtown joint.

"A Seasoning Called Primavera" lifts us into more cosmic climes. Based on an old Alabama recipe, Gay celebrates the spring rites of cooking after a tough Chicago winter. The instruments even mimic various kitchen sounds of knives chopping or coffee bubbling. Thus for all its edgy zeitgeist, this collection celebrates the natural world too. Even the album title tips a nod to nature's power over human constructs. Later, the eerie "7th Stanza" is a harmonium whisper above which Gay narrates a fable of seductive forestry. We also get the Ngoni (an African plucked lute) whose quick-paced notes played by Will Faber lend a mythic rurality. In the same breath, mention must go to drummer Tommaso Moretti, whose trancey grooves offer an update on native folk traditions.

Delving further, "Miss Nealie Burns" features banjo, Balkan motifs and tropicalia like some backstage jam at WOMAD. "Me, Jayve & The Big Bee" is all brooding brass tones and warming strings. Then finally "Oh No... Not Again!" lets both cornet and tuba bounce along over scat singing into a free jazz skirmish.

In essence, this jam-packed album stirs up the vibrancy of life itself. Downtown Castles is a bright parade of humanity, led by Gay as its dazzling grand marshal.