Man Overboard Quintet: Down In The Deep Deep Blue 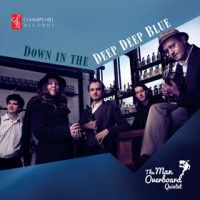 A rhythm section that would make even a half-decent front line sound great; a front line that would enhance any ensemble; a bunch of great, sometimes neglected, songs with catchy tunes and quirky, image-laden lyrics. Surely, it's all just a wonderful dream? Nope, it isn't. It's Down In The Deep, Deep Blue, album number two from the Man Overboard Quintet.

All Hands On Deck (Champs Hill Records, 2013) was released under the name of Man Overboard, giving no clue as to the band's size but enabling confusion with the New Jersey pop-punk band of the same name. It was a superb debut, filled with familiar songs from the early decades of jazz. Down In The Deep, Deep Blue features the same musicians with the same recording approach—no overdubs, favoring a live feel over technical perfection. This time the song selection delves deeper into the less well-known corners of jazz, mixing standards ("Please Don't Talk About Me When I'm Gone," "What A Little Moonlight Can Do") with rarely-heard gems ("Me And My Gin," "I Wish That I Were Twins").

The band have trawled the decades of the early twentieth century to bring together this collection. The oldest song is Philip Braham and Douglas Furber's "Limehouse Blues," from 1922: the most recent is Horace Silver's 1959 tune "Sister Sadie." Tempos range from the very slow (Fud Livingston's rather odd "Imagination," Victoria Spivey's despairing "Dirty TB Blues") to the fast and swinging ("What A Little Moonlight Can Do," or Duke Ellington's wonderfully joyous "Jubilee Stomp").

Bassist Dave O'Brien and guitarist Jean-Marie Fagon provide the requisite rhythms whatever the tempo: clarinetist Ewan Bleach and violinist Thomas Gould are as inventively melodic as one could wish. "Limehouse Blues" showcases the quartet's talents exceptionally well, moving between the subtle opening violin and clarinet harmonies to the harder-swinging later section with graceful ease.

The playing is excellent, but the Man Overboard Quintet's most distinctive feature is Louisa Jones' voice. If Billie Holiday had come from the north-east of England and sung an octave or two higher, this is what she might have sounded like. Jones brings a real sense of heartbreak to "Good Morning Heartache," and "Carelessly" aided by restrained but lovely backing from all four instrumentalists. She mixes melancholy and belligerence on "Me And My Gin"—ready to "fight the army and the navy" even as she tries to find romance at the bottom of a bottle.

Jones can tug at the strings of the hardest heart. The gentlemen of the orchestra don't reach the vocal heights which she achieves, but they can carry a tune. The smooth vocal harmonies on "Trav'lin All Alone" and "Imagination" are a delight, the rare lead vocals are strong.

There's a real joie de vivre about Down In The Deep, Deep Blue, even when the subject matter gets a bit grim. The Man Overboard Quintet has a distinctive style, strong individual personalities and a collective ear for a great song—the end of year Best Of list beckons.

Please Don't Talk About Me When I'm Gone; Sister Sadie; Trav'lin All Alone; New Orleans Wiggle; Imagination; I Hate Myself For Being Mean To You; Me And My Gin; I Wonder Where My Baby Is Tonight; Carelessly; Jubilee Stomp; Good Morning Heartache; Limehouse Blues; Dirty TB Blues; I Wish That I Were Twins; If My Heart Could Only Talk; What A Little Moonlight Can Do.