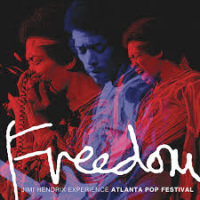 Jimi Hendrix' performance at the Woodstock Music and Arts Festival in Bethel, NY may be his most iconic single live performance, but as the conclusion of the August 1969 event, it was offered in front of approximately half the 300-400,000audience he faced at the Atlanta Pop Festival roughly a year later.

Contained on two-disc sets of compact disc and vinyl LP, Freedom documents the concert in its entirety (except for a grievously out-of-tune "Hey Baby (New Rising Sun)" finale), thanks to some technical expertise that borrows from the film recording, content of which appears on Electric Church (Experience Hendrix/Legacy, finds the reconstituted Jimi Hendrix Experience—the late rock and blues icon on guitar and vocals, Billy Cox on bass and stalwart Mitch Mitchell on drums—giving a fiery performance fully in line with the charged atmosphere created by the occasion.

Taking place in the deep south at a time of shifting cultural values, racial and otherwise, Atlanta Pop was centered on Hendrix' appearance on the bill, the critical timing of which revolved around his Independence Day set during which a massive fireworks display rendered literal the explosive nature of musicianship where the players truly had something to prove: the reunion of the original experience with bassist/composer Noel Redding, was short-lived earlier that year, despite its much-ballyhooed announcement via Rolling Stone magazine.

So while early culls from the Jimi Hendrix discography, such as the opener of "Fire" and "Spanish Castle Magic," captured the crowd's attention, their inclusion was a means to the end of getting them to hear the trio play blues, in the form of "Red House" and "Hear My Train a Comin,'" along with numbers that, like the latter (autobiographical?) twelve-bar, were part of the album Hendrix and co. were in the process of recording at that time, first appearing on The Cry of Love (Reprise, 1971)

Enlisted upon the departure of Redding, Billy Cox was a former Army friend of Hendrix' whose comparatively simply bass patterns supplied the ideal nexus for the peripatetic percussion of Mitchell and the wildly imaginative dynamics of Hendrix guitar work. The palpable sense of play within their interactions belies the ominous air arising from the cover of Bob Dylan's "All Along the Watchtower" and may even contribute to the shared pleasure within these quick takes on "Foxey Lady" and "Purple Haze." (Hendrix exhortations to the crowd to stand for the latter indicative of his wholehearted engagement).

Certainly this lighthearted element adds to the decidedly different hammer-down force they apply to the riff of "Voodoo Chile (Slight Return)," but it's far removed from the light touch with which they handle this title song and "Stone Free;" there is absolutely no redundancy here due to the inclusion of both similarly themed tunes, especially when they're followed by the anthemic "Star Spangle Banner."

And with the final number here "Straight Ahead," there's no mistaking the purposeful composition of this set, which benefits tremendously from high volume to bring out nuances otherwise hidden in a somewhat distant thin sound from a forty-year plus recording prepared for release by Jimi Hendrix long-time studio collaborator Eddie Kramer.

The enlistment of his services, as well as those of Bernie Grundman, who mastered the mix by the aforementioned famed recording engineer, is a corollary to the colorful packaging of Freedom: Atlanta Pop Festival, the sum effect of which constitutes yet another important exercise in the archiving of Jimi Hendrix influential work, rendering obsolete its inclusion in the four-CD box set, Stages, (Reprise, 1991).