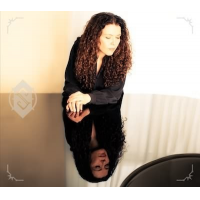 The piano trio is the supreme discipline in jazz. Through rich possibilities, it functions as a strong filter sifting out those few who were and are able to set new standards. What matters is how the three instrumental vertices relate to each other dynamically, harmonically and soundwise to build something coherent, in close dependency. Eventually, each shift at one vertex inevitably triggers shifts by the other two.

New York pianist Sylvie Courvoisier, not excessively jazz affined in her previous work, kept distant from this classic format hitherto—even when Tzadik's spiritus rector John Zorn kept on inciting her. On her way 'towards the trio' she first and foremost had to find suitable partners. Finally, with the interplay of drummer Kenny Wollesen and bassist Drew Gress the right sensibilities seemed to meet, so that the move to a new territory could be made. The result captured on this album is a heterogeneous array of nine challenging pieces, unified by the highly inspired and refined interplay of three outstanding musicians working flexibly, through swiftly shifting, floating and wavering shapes. It definitely creates a difference from the usual piano trio sound, permeated by traces of, and allusions to, some usual piano trio figures as in "The Charlier Cut" but these are dispersed immediately in a decisive way.

Courvoisier is not a pianist who rolls out a carpet of refined texture. She builds bold tonal configurations that are concatenated in a dramaturgy, thereby generating a richly contoured sculpture. That also entails having pieces within a piece. Changing between pieces in a piece is done by jump cuts similar to those in movies. Multiple strands run through one another with contrasting moods in the opening "Double Windsor." A rhythmically driving and an elegiac motif alternate in a compelling way. What is still more intriguing, it is conjuring up in full Juan Tizol's "Caravan" without falling into its mold. In the subsequent "The Charlier Cut," back and forth jumps are even quicker and fiercer. These—not solely aleatoric—cuts reinforce each other in dynamics, mood and light in a great flow fed from underneath.

As in the case of tying a Windsor knot, shaping operations are carried out in such a sophisticatedly ordered, interconnected way here that sharp beauty emerges from it. These forms of sharp beauty all bear a magical and mysterious dimension—one of this music's most remarkable features. That results from Courvoisier's intrepid, clear and consequent approach, plus the quality of her decisive ear. Her playfulness is also made up from titles as "The Charlier Cut," "Inscordatura" or "To Fly To Steal" and mirrored in the Escher-inspired album cover. The strong qualities of each musician are really refocused, branded into a genuine cut and in new light.

The listener gets nothing on known routines here, on variations of a theme or on linear progression. What the listener does get is a well-organized cross of Latin reminiscences as in "Cigale" or "Corto," rock riffs in "October 08," grooves in "Downward Dog," drone fanning in "Inscordatura" and also known, overused patterns constructively pulled apart as in "Pendulum," which uncovers a ballad of gradually shining beauty in a remarkable way. Due to the closely interrelated interaction constitutive of a piano trio, the music is driven by a surprisingly stark rhythmic density, without falling into manifold routines or clichés. What is still more significant : there is—without a direct stylistic expression—the clearly perceptible echo of Courvoisier's intensive cooperation with innovative flamenco dancer Israel Galván—especially in the title piece.