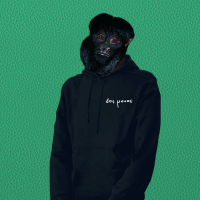 "In 20XX" begins with a saxophone sample from Thelonious Monk's "Brilliant Corners," then piles on a blend of brittle pianos, boom bap drums, cartoonish hoots and spastic onamonapia. All three rappers trade bars, switching between unique tones and flows before Botsu's unhinged wails double the Thelonious Monk sample on the track's hook.

While Dos Monos' songs establish Dos City's apocalyptic atmosphere, the album would not be complete without the trio's lyrics, which clarify its tone with surprising allusions and metaphors. "Clean Ya Nerves (Cleopatra)" stands out as Dos Monos' lyrical masterpiece. Over a dizzying mix of horns, clunky drums and warped piano, Zo Zhit raps a dark, cryptic verse, referencing everything from abstract painter Jackson Pollock to the Greek tragedy "Oedipus Rex." Taitan Man fleshes out the song's confusion and despair by declaring, "The world with no rule has come," while Botsu's manic verse alludes to Egyptian gods, Soviet political figures and Shakespeare characters.

The soft flutes, wavy guitars and warm bass of "Agharta" provide a refreshing cooldown which Zo Zhit uses to deliver his most personal verse. Zhit raps about wanting to escape an "institutional Shangri-La," breaking free from being a cog in a machine to "roll like a fool." Zhit explains that producing beats helps him cope with depression, which recontextualizes the album's sound. Knowing that each strange detail and disturbing sample comes from a need to process real darkness makes Dos City a little less surreal and much more meaningful.

Dos Monos' debut album masterfully blends nostalgic samples with forward-thinking production and outlandish performances. If you enjoy experimental music, do not let a language barrier keep you from listening to one of the year's weirdest albums.

Cityintro; Theater D; In 20XX; Clean Ya Nerves (Cleopatra); Daimyō; Bacchus; Muffin; Do Not Freeze; EPH (wo wo); Agharta; Schizoidian; Abdication b4 he dies; Dos City.