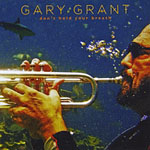 Years ago, The New Yorker did a profile article on the appropriately named New York studio lead trumpet legend, Bernie Glow, depicting the daily rigors of studio recording life in the now long-gone halcyon days of that city's recording scene. Today, Los Angeles studios reign supreme, the trumpeting envelope surpassed daily as registers are pushed, rhythms are highly complex, acoustic instruments compete with technologies, and genres mix and mingle. Studio trumpeters require a high degree of precision, and the unflinching ability to deliver the chops, emotion and creative necessities, all while engaging the whims of composers, arrangers and producers. As lucrative as it might be—and as Glow did—studio players toil in anonymity for years, stretching out creatively in other bands of various size and genre: some record; many do not.

Don't Hold Your Breath demonstrates the magic that can result when one doesn't. When Grant sends that electric carbon dioxide though his horn, the result is an impeccably performed, magnificently produced CD. Assembled here are some of L.A.'s greatest players, composers and arrangers—testimony to Grant's L.A. rep that allows him to gather these finest of the fine—and they're obviously having a ball, performing with creative brilliance.

Funk-rock and smooth synth-sound grooves dominate, each played with a meticulous precision that still stimulates; nothing comes across as sterile, overworked or disingenuous. The opening "Tres Gatos Profundos" is a perfect example of what Grant and his "heavy cats" are capable, pushing the rhythmic and technical sound barrier, and burning over drummer Johnny Friday's Latin fire here, and throughout the entire session.

Grant shows that he can stretch out jazz-wise ("Thank You, Michael") and play beautifully and with significant emotion on "I Still Hear You" and "Live for the Day," two stellar ballads featuring Grant's rich, involving tone and marvelous nuanced touch to melody and phrase. His lead work throughout the session redefines accuracy, drive and swing; his overdubbed "section work" on a number of cuts furthers his rep as a player's player.

The arrangements, particularly "Ireland," "Native American," and "One Peace," are outstanding and the production values on these selections and the entire recording are superb.

The rhythm section, led predominantly by drummer Vinnie Colaiuta, bolsters the set. Colaiuta is simply superb, his time impeccable, and his ability to drive the group along—never needed, by the way—is admirable. His nuanced work on the beautiful slower cuts makes them shine. Saxophonist Dan Higgins plays with heavy chops—and great choice—when he solos, as does keyboardist Wally Minko.

It is so wonderfully refreshing to have Grant step out in the sunlight and let it all fly and glow. Hopefully he and other studio players will come up for air occasionally, and release more terrific efforts like Don't Hold Your Breath.