Home » Jazz Articles » Donna Deussen: High Wire and On the Street Where You Live

Donna Deussen: High Wire and On the Street Where You Live

Duessen has released two recordings, about ten years apart. Side-by-side, They offer a staccato look at the singer's evolution. In a highly competitive field, Donna Duessen is deserving of much more attention than she has been given. Her time has come. 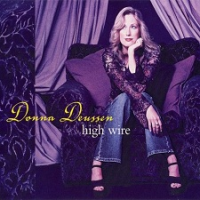 Vocalist Donna Deussen reveals the influence of Tierney Sutton through her inventive arrangements of the American Songbook. Creative arranging can give new life and reconsideration to jazz standards. Deussen joins Sutton and Wilson in the forefront of using arrangements to reveal the nuances of these well-crafted songs.

On her debut, High Wire, Deussen surveys a mainstream collection of standards. "Skylark" is given a strolling treament that shows the song effective as an up-beat ballad. Deussen blows the carbon out on her wide-open take of "Blues In The Night." Guest saxophonist Eric Marienthal gives a bar-walking R&B solo that gives way to a slow blues vamp before Deussen heats things up again singing torch at 2000 degrees.

"That Old Devil Moon" is transformed into a Latin excursion propelled by pianist Mark Massey , who solos robustly. Deussen treats Joni Mitchell's "River" respectfully, allowing this modern standard to fully breathe. Deussen's voice is durable and well-balanced. Her phrasing is certain and well considered. Deussen imparts in her songs that part of herself that enriches the lyrics by her delivery. "I Will Never Marry" is upbeat and sung with a matter- of-fact air that stikes a keen juxtaposition against Stanley Turrentine's sexy and smoldering "Sugar." Massey changes to electric piano for this latter tune, giving it a strange '70s -'00s vibe that swingseffortlessly. High Wire is fully formed and realized as a debut. What does Deussen do next...? 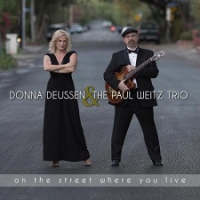 Donna Deussen and the Paul Weitz Trio
On the Street Where You Live
Self Produced
2014
...she expands her repertoire with a creatively programmed assembly of songs. The Papas' "California Dreaming" opens the disc with a gentle jolt that is not fully realized until Deussen shows off her scat chops and duels with tenor saxophonist Wayne Wayne. Deussen's scat singing is full-throttle with no . She scats as naturally as she sings. The after-hours thrill of Donald Fagen's terminally hip "Do Wrong Shoes" is accentuated by bassist Matt Vanbenschoten's walking tempo seasoned with guitarist Paul Weitz's too-cool stylings. These songs are slick and exceptional.

Lerner and Loewe's title piece enjoys shifting time signatures and a bright flute solo by Geoff Nudell. Where Deussen covered Joni Mitchell's "The River" on High Wire, she turns her attention to an equally reverent interpretation of "Both Sides Now." Weitz's crack trio combines with Deussen's voice like a perfect Fall pie crust, rich and comfortable. A spare and humid coupling of "Black Coffee" with "Night in Tunisia" highlights the recording with the most inventive of arrangements. Deussen dances with Wayne's tenor saxophone, bouncing phrases off the hornman like a crazed and inspired handball player. the singer has the upper hand.

On the Street Where You live is beautifully completed and realized. Deussen's voice, if anything, has become more like itself: more comfortable and compliant. Deussen never over-sings. The traditional "Fly Me to the Moon" melds well with the churchy funk of Horace Silver's "Sister Sadie." "If I Only had a Brain" and Bill Evans "Waltz for Debbie" make for one of the more inspired couplets closing any recording. Very good show, here!